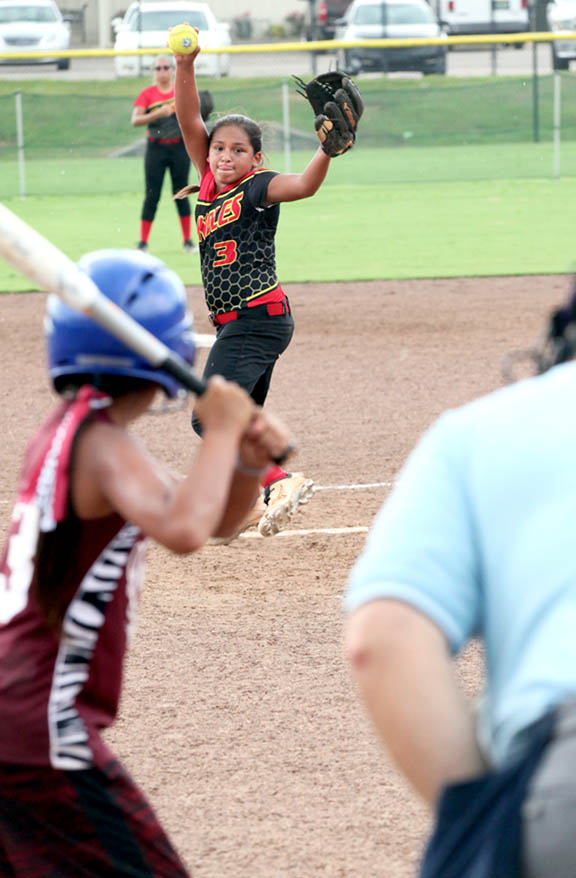 ATMORE, Ala. — Challenges don’t come much more daunting for softball teams than the one the Lady Seminoles 11- and 12-year-olds faced July 18 at the Native American Youth Organization (NAYO) tournament.

“That’s a lot to ask of these girls,” said Lady Seminoles coach Dallas Nunez. “It showed. They were tired.”

Determined to return to the championship round for the second consecutive year, the Lady Seminoles looked sharp as they won their first three games of the day. Ava Nunez pitched the team to a comfortable win against the Lady Dominators (Choctaw) in the first game.

The third game – an 11-3 triumph that eliminated the Poarch Creek – featured a strong outing on the mound from Janessa Nunez, who worked out of early inning jams without allowing a run.

Solid defense from the Lady Seminoles aided the victory. Shortstop Analyse Jimenez set the tone early by throwing a bullet to catcher Jacee Jumper to nab a runner at the plate in the first inning.

The Lady Seminoles’ bats erupted in the bottom of the inning with a leadoff triple from Analyse, an RBI single from Jacee, hard-hit singles from Charli Frye and Mallorie Thomas and a run-scoring groundout from Janessa.

In the second inning, the Lady Seminoles increased their lead to 6-0 thanks in part to a two-run double by Charli. Janessa and Mallorie also notched RBIs in the inning and Jacee and Canaan Jumper had singles.

“I made the girls believe we were playing five games today. Unfortunately, we fell one short,” coach Nunez said.

The Lady Seminoles’ hard work under grueling conditions was rewarded with the runner-up trophy. A few feet away, Elite celebrated with the champions’ hardware.

“That’s a tough team,” coach Nunez said. “These girls play year-round; that’s their squad. Our girls play year-round, but they play on different teams. When we come to NAYO, they know how to play, but they just don’t have the trust that they should have, but it’s coming around. For most of these girls, this is their third year playing together.”

A marathon relay that involved nearly half the Lady Seminoles’ 7-8 softball team contained all the right intentions even if didn’t result in an out.

“If that would have been an out, I probably would have done cartwheels,” coach Ramona Baker said.

The significance of the relay’s journey – which in this case traveled from the right fielder to the second baseman to the pitcher and to the catcher – didn’t go unnoticed. It was an example of the still-evolving skill development, thought process and teamwork that the Lady Seminoles showcased in the tournament’s youngest division.

“We’re trying to let them know there’s more than just plays at first base. With them being 7-years-old, it’s hard to teach them that, but they’re learning,” Baker said.

The Lady Seminoles finished 2-2, which included an opening day win against Sweet Heat (Choctaw) and a loss against a Choctaw travel team.

“We played a travel ball team and that’s a little more difficult. (Those) girls are going to the World Series when they leave here; we’ve only had a total of nine practices,” Baker said. “I will be starting these girls in travel ball soon, so we’ll be able to hang a little better next year at NAYO.”

Using an orange bat to tap her cleats and then doing the same to the far edge of home plate, Adryauna Baker showed the type of mannerisms in the batter’s box associated with pro players. Perhaps it was for good reason because the Lady Seminole played like a big leaguer in the 9-10 softball division at NAYO.

“She had a good tournament,” said coach Kelley Smiley, whose team went 1-2 in the five-team division. “She’s a hustler. She’s always up for a challenge. She caught, she played shortstop. She was everywhere. She gives it 100 percent whatever she does.”

Adryauna belted a leadoff triple that triggered a four-run first inning in a 7-2 win against the Diamond Queens (Cherokee) on July 18.

She also smashed a double over the third base bag in the second inning.

The Diamond Queens notched two runs in the first inning but were held scoreless the rest of the way by Madison Jumper.

“She’s usually not a pitcher, but she came out and threw strong this morning,” said Smiley, who also received strong pitching performances in the tournament from Haylie Huff and Elle Thomas. “The pitching was very strong.

Right fielder A’niyah Baker scorched a double, but she also turned in a defensive gem when she threw out a runner at first base to start the second inning. Madison fanned the next batters to end the inning.

The Lady Seminoles made solid contact at the plate all game, including Jennie Osceola’s RBI single that concluded the scoring.

“When we hit, we hit hard,” Smiley said.

Even though the Lady Seminoles were eliminated in their next game, which ended on a triple play, they departed with an optimistic outlook.

“We play NAYO every year, and every year we get better,” Smiley said. “We’ve just got to keep pushing, keep practicing and keep fighting.”

The Lady Seminoles used a fast start to win its NAYO opener against the Hurricanes (Choctaw) in the 13-15 softball division.

Alicia Fudge led off the game by slapping an opposite field single to left. She was among the standouts at the plate for the team in the tournament.

“Alicia was putting the bat on the ball,” coach Melissa Braswell said.

Alicia scored on a double by Dasani Cypress, who also had a productive tournament with the bat.

Camryn Thomas followed with an RBI single that brought in Jillian Rodriguez. Pitcher Aleina Micco notched the victory for the Lady Seminoles, who went on to finish fourth with a 1-2 record among six teams.

“We did well for not having much time together and to gel together,” Braswell said. “We ran ourselves out of a couple innings, mental errors on the base paths, that kind of stuff, but overall the team was a pleasure to coach. They had some heart.”