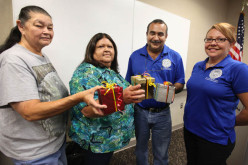 BIG CYPRESS — The Environmental Resource Management Department (ERMD) did not wait until Thanksgiving to give thanks to scores of employees.

“We already and always have had an excellent staff and a cohesive team made up of dedicated individuals. Today, the Tribe asked us to show appreciation and thanks for all you do,” ERMD director Cherise Maples told a room filled with workers during an Oct. 27 meeting in Big Cypress.

From those who work at desks to those who toil in the trenches, employees with five or more years employment with the Tribe were recognized with service awards, applause and huge slices of vanilla and chocolate cake.

“Some people in this room aren’t even 37 years old yet,” joked Carter, who was hired in 1977 and now works in water quality as the administrative service manager.

The laughs kept coming when some names that were called to receive pins seemed oddly unfamiliar.

“Who are these strangers, anyway?” called someone from the crowd.

Few knew that “Cotton” is actually Scotty Baxley, “Eric” is really Norman Johns and “Jeri” is a nickname for Edith Eshkibok.

Maples said the department operates with about 40 employees assigned to various sub-departments that include operations and maintenance, administration, water quality, environmental science (wetlands and wildlife) and environmental compliance.

Surface water management, caring for wetlands and wildlife, and protecting the Tribe’s water rights are the department’s top three priorities.

During the past year, ERMD completed all project goals that included the removal of invasive species in designated areas tribewide and the installation of drainage pipes in Brighton south of Harney Pond Road.

Many daily tasks demand hours of hard labor in sweltering heat and relentless wetlands that teem with insects and wildlife. Castillo, for example, is a geographic information systems (GIS) specialist, which requires his frequent presence in the field for data collection and other duties.

“We’re a close group that watches out for each other. We try to never send anyone into the field alone. We travel together and protect each other,” Maples said.

Some hazards, like Africanized bees and poisonous snakes, require employees to depend on each other for additional eyes and ears.

Carter said she has been called on by workers who ” pick my brain.”

She served on the land use commission for two decades, attended business college part time in Sunrise and labored with a skeleton crew under the first director Craig Tepper for more than 25 years. In the early days, when two or three people made up the department staff, Carter sprayed ditches for mosquitoes, ran the office, dug drainage culverts and did anything and everything that needed doing.

“We went out there and we did it ourselves. It was always an honest day’s work,” Carter said. “It became part of my life. I can’t retire. I wouldn’t know what to do with myself.”

For Billie, two dozen years with the department seems like no time at all.

“I am just happy to still be here,” she said.

Billie has held many positions. She started as a laborer who cut paths through woodland for land surveyors. Soon, she began teaching others how to use the surveyor rod. Later, she collected water for samples to be tested at laboratories. Much later, she became a department cultural adviser. Today, she records rainfall at scattered water gauges.

Working for ERMD is not for everyone, Billie said. Employees need to be good swimmers, be aware of existing allergies to plants and creatures, and be willing to spend long, hard days under the broiling sun while wearing layers of protective clothing.

“A lot of people find that the job is not their cup of tea. But today, here are the people who stayed because they love the job and the challenge. When you love what you do, it’s not like work at all,” Billie said.