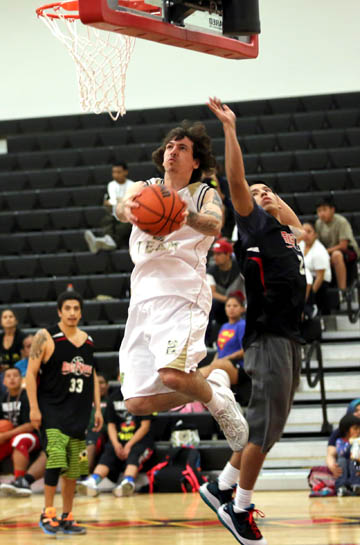 Six teams, all Native, comprised the division in the double-elimination tournament. Some teams featured a combination of Seminole and Miccosukee players.

The championship tilt wasn’t decided until the final seconds. A jump shot by Shelby Osceola put Nothing Fancy in front 64-63 with 1:12 left, but Money Team seized the lead for good when Ty Pierce converted a no-look pass from DeForest Carter into a 3-point play. Nothing Fancy was hit with a technical foul, which turned into another point for Money Team.

With Nothing Fancy trailing by three points, Josie Balentine nearly tied the game in the waning moments, but his 3-point shot rimmed out.

Carter, who recently concluded a standout four-year career for Embry-Riddle Aeronautical University in Daytona Beach, tacked on an additional insurance basket to conclude the scoring. He finished with nine points.

Trewston Pierce, who led Fort Lauderdale High School in scoring this season as a senior, drained a team-high 19 points for Money Team, which received 18 points from Ty Pierce and 16 points from Gore, who plays for Haskell Indian Nations University in Kansas.

The game-high scoring honor was earned by Nothing Fancy’s speedy point guard Charlie Osceola. At 5-foot-6, Osceola showed no fear going into traffic against players nearly a foot taller.

“I had to beat them with speed,” said Charlie Osceola, a freshman at Miami’s Ferguson High School, where he was the varsity basketball team’s leading scorer this season.

Charlie Osceola finished with 25 points and was named the tournament’s most valuable player.

“It felt good, even though we didn’t get the win,” he said.

Nothing Fancy received 10 points each from Greg Carter, Jerome Davis and Shelby Osceola.

Money Team led by as many as 11 points in the first half, but Nothing Fancy clawed its way back and took a 35-34 lead at halftime thanks to a 3-pointer from Shelby Osceola.

Trewston Pierce shifted into a higher gear in the second half when he scored 13 points, including three 3-pointers.

At the start of the two-day tournament, Money Team didn’t look like champions. They dropped their first game to Big Town, 65-64, but roared back in the losers’ bracket the following day and cranked out four straight wins.

Hollywood Heat won the men’s legends division on April 16. Charlie Frye led the Heat with 24 points in the decisive 47-42 win against the Seminoles. Vince Billie had a 3-pointer for the Heat. The Seminoles received 12 points from Jason Don Billie.

In the women’s division, the last leg on the path to perfection for the Lady Ballers wasn’t easy.

The team captured the adult women’s division during tournament play by holding off a scrappy N Squad, 65-55, in the championship game on April 18 at the Howard Tiger Recreation Center. The Lady Ballers finished 3-0 in the three-team division.

The teams traded leads and a bevy of 3-pointers throughout the first half. Every time one team appeared ready to pull away, the other answered back, and the responses usually came from beyond the arc.

N Squad, led by Nora Billie, opened a 15-10 lead on a fast-break layup by Annie Osceola only to see the Lady Ballers knot it up with a 3-pointer from Courtney Osceola and a basket from Candace Blackbird.

A late surge from the Lady Ballers before halftime proved to be the turning point. A 3-pointer by Tasha Osceola and a jump shot from Blackbird gave the Lady Ballers a 31-25 lead at the break.

N Squad never regained the lead as the Lady Ballers built a cushion that grew to 45-33 on a 3-pointer from Courtney Osceola. While her teammates were hitting long range shots, Raeanne West owned the paint at both ends. She scored six consecutive points during one stretch for the Lady Ballers.

Although her team lost, Tigertail was rewarded for her solid performance in the tournament by being named the most valuable player.