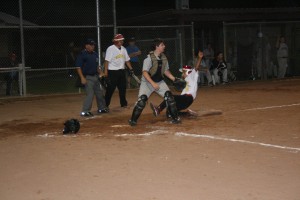 The Seminoles triumphed over the Terriers 12-2, capturing their second win of the season. The game was held at the Ollie Jones Memorial Park on the Brighton Reservation.

This is the first year that Charter School has a boys’ baseball team. To commemorate the momentous occasion, Brighton Council Rep. Andrew J. Bowers Jr. and principal Brian Greseth threw the first pitches.

“PECS is very excited to add baseball to our athletic program,” administrative assistant Michele Thomas said. “We played our first game last night, away, against Sebastian River Middle School. We won, 11-5. One young man, Elijah Finney, commented in the after-game wrap-up, ‘Do you guys realize we just won the very first PECS baseball game?’ They were definitely on a high.”

“It is very exciting and somewhat of a challenge being a brand new team,” coach Tewksbury said. “We have quite a bit of talent to work with and haven’t had too much (of a) problem laying the groundwork to be successful.”

The middle school team plays with high school rules and uses high school field dimensions. The pitching mound is 60 feet, 6 inches away from home plate and the bases are 90 feet apart. Kids 12 and younger normally play on smaller fields for recreation or travel baseball and do not move to larger fields until they are 13 and older. But the larger field dimensions have not posed much of a problem for the boys, coach Tewksbury said.

“I wasn’t sure how we would do in that regard, but I have found that we have five or six guys that can pitch and three that can catch,” he said. “Our hitting is also a plus.”

Coach Tewksbury said it’s not all about winning; it’s about having fun.

“We are also fostering an atmosphere of discipline and structure so that these guys might take that with them as well,” he said.

To be on the team, the athletes must have teachers complete a daily effort sheet, which they turn in to the coach each day. Participation in games is decided based on positive effort sheets. Athletes must also maintain at least a 2.0 GPA to stay on the team.

“Being a part of the athletic program helps instill pride and leadership,” principal Greseth said. “As part of being an athlete, it helps some students remain focused on their academics. Student athletes are ambassadors for not only our school but also the community.”

Coach Tewksbury said one of his main goals for the season is to help the eighth-grade players prepare to compete as freshman next year in high school for a starting position on the varsity team.

“I would describe this team as talented, hard working and eager to learn,” he said. “I feel very blessed to have this opportunity to be a part of this team. I think very highly of these guys and will continue to do all that I can to help them succeed on and off the baseball field.”