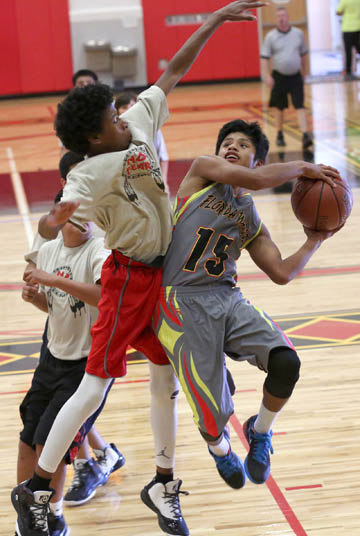 HOLLYWOOD — While basketball teams from Tribes in New York and Mississippi battled in a girls championship game, Mike Tiger watched from the front row bleachers near midcourt. He wanted to be close to the action in a new facility that is close to his heart.

“We’re real happy with the participation we got from the other Tribes,” said Mike Tiger, who watched games until about 11 p.m. on day one and returned the next day for the finals.

In the center’s bustling lobby and hallway, hundreds of players, coaches and spectators passed by glass-framed cabinets filled with photos and plaques of Seminole Sports Hall of Fame inductees, including Howard Tiger, whose accomplishments as a multi-sport athlete and a coach for youth are recognized on a plaque that shows him in football gear.

The basketball court was divided into two side-by-side courts until the championship games when the full court was used and all bleachers were lowered. Spectators occupied nearly every seat for the first title game between New York’s Seneca Falls and North Carolina’s Smokin Hot.

“It’s wonderful,” Mike Tiger said. “I’m just proud for the community and the Tribal Council that passed resolutions that support this. It’s a great honor to my family to have this built in my dad’s name. I’m just real happy with the outcome.”

Reviews from the out-of-town guests were positive.

“The gym is very nice,” said Seneca Falls coach Frank John, who was impressed with the upkeep of the court. “They don’t mess around; they were cleaning every scuff mark.”

Colby Hemphill, 17, a forward on the ABC team from North Carolina, said he liked the facility, even with what he considered unforgiving rims.

“The rims were not friendly at all,” said Hemphill, whose team finished third in its division.

As for Seminoles who were accustomed to playing in tournaments next door in the old gym – now known as Seminole Classic Gym – the upgrade was welcomed.

“It’s way better,” said Leilani Gopher, who helped the Native Elite 14U girls team to a third-place finish, the best mark among the nine girls and boys Seminole teams.

With nearly 50 teams and more than 500 boys and girls ages 12 to 18 in the double-elimination tournament, more than one facility was required to accommodate all games within two days. The Classic Gym was busy with games both days and Hollywood Christian School was also used for a few bouts.

NAYO secretary Salina Dorgan said the tournament rotates annually among its members. NAYO is comprised of Tribes from Alabama, Florida, New York, North Carolina and Mississippi. Dorgan said the tournament is traditionally held Easter weekend because players don’t have school on Good Friday and out-of-state teams can travel back home Sunday before the start of the school week.

For New York’s teams, that meant a 20-plus hour charter bus ride back to Seneca Nation.

“With two floors here, it was convenient, and we have the other locations. All in all, it’s gone pretty good,” Dorgan said as she manned the tables in the lobby that featured giant boards with schedules and results from each of the four divisions. “The flow of our brackets has stayed consistent to the time we set.”

About 25 Seminole Recreation employees from Big Cypress, Brighton and Hollywood handled a variety of tasks. They operated game clocks, kept statistics, managed crowds and sold tournament merchandise. Dorgan said staff departed the gym at about midnight on the first day and returned about seven hours later to begin day two.

As for NAYO hoops, none of the Seminole teams reached championship games.

Native Elite narrowly missed a bid to play in the 14U girls final but fell to the Lady Cyclones from the Mississippi Band of Choctaw Indians, 48-47, in the semifinals.

Unlike some visiting teams in the tournament who play together back home in leagues, Native Elite and other Seminole teams were created just for NAYO and didn’t have much time to prepare.

“We were a last-minute team. If we would have practiced more, I think we could have had it,” said Native Elite forward Dayra Koenes.

Native Elite rallied from an early 13-2 deficit against the Lady Cyclones to get back in contention before halftime thanks to 10 points from Dasani Cypress, two 3-pointers from Gopher and one from Charli Frye.

In the second half, Native Elite dominated at times and built a 43-38 lead with four minutes left behind baskets from Cypress, December Stubbs and Tiana Stubbs. Cypress finished with a game-high 17 points, which is the same amount the Stubbs duo combined for in the second half.

December Stubbs made two pressure-packed free throws with 30 seconds left to give Native Elite a 47-46 lead, but the Lady Cyclones’ Lorianna John scored the winning basket with 16 seconds left.

Native Elite won three of its five games in the double-elimination tournament. Other Seminole teams in the 14U girls division included Seminole Wind (0-2) and the Lady Rebels (0-2).

In 17U girls, Native Hoops went 1-2, which included a win against Hustle Gang from Mississippi.

On the boys side, Dark Side, which featured a combination of Seminole and Miccosukee players, finished 3-2 in the 17U division. Dark Side’s wins came against the Bear Cats from Mississippi and two teams from North Carolina.

Other 17U Seminole teams included Florida Boyz (2-2) and Unexplainables (1-2).

All three Seminole teams in the 14U division – Florida Natives, Seminole Warriors and SFL – went 0-2.

The Native Dominators (14U girls), Choctaw Ballerz (14U boys) and Bad Boyz (17U boys) – all from Mississippi – captured championships as did Smokin Hot, from the Eastern Band of Cherokee in North Carolina, in the 17U girls division.