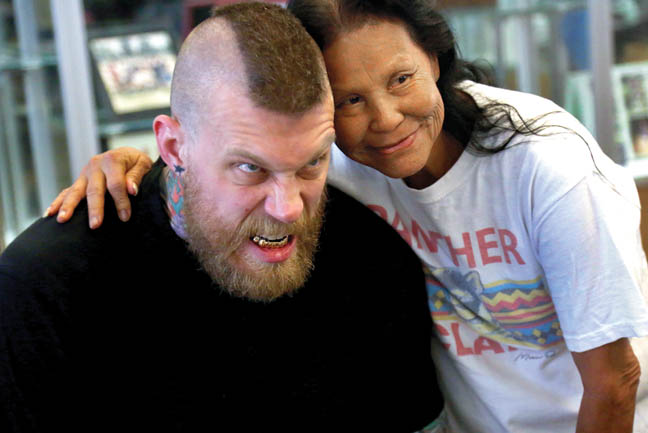 HOLLYWOOD — The mysterious, shiny, black, souped-up muscle car that pulled up in front of the Howard Tiger Recreation Center appeared suitable for Batman, but it was Birdman who emerged.

Much to the delight of hundreds of fans, 6-foot-10, 245-pound Miami Heat forward Chris “Birdman” Andersen – sporting the vast array of tattoos that have made him one of the NBA’s most recognizable characters – spent a couple hours April 18 signing autographs and posing for photos in the lobby of the Howard Tiger Recreation Center. The celebrity spokesperson for the Tribe’s Hard Rock Energy drinks signed everything that came his way, including basketballs, hats, shirts, photos and even limbs. He shook hands, too, including with Raymond “Sugarfoot” Stewart III.

“He inspires the kids. That’s what they need, something to look up to, and there are other things out there in life to do. It’s a good thing they bring him to the reservation,” the father said.

Hollywood Board Rep. Steve Osceola estimated about 300 people attended the event, which coincided with the 47th annual Howard Tiger Memorial Basketball Tournament that was held for the first time in the new facility that bears Howard’s name.

“Howard was one of our Tribal leaders,” Rep. Osceola said. “He was a Tribal president. He was a war leader, a Marine, and he was one of our first leaders in Hollywood to start organized sports. He helped clear this field behind [the Center] and started the first basketball, baseball and football teams.”

Tournament games took place during Birdman’s visit, but he didn’t shoot any baskets. He was recognized during a brief ceremony at midcourt by Rep. Osceola and President Tony Sanchez Jr. Birdman also received a patchwork jacket that was presented by Joe Dan Osceola.

“We wish the Heat were in the playoffs, but we had an opportunity to bring him here for the Tribal community to meet him,” Rep. Osceola said. “He’s all about Hard Rock; the tattoos; he loves the music.”

Even though he’s been in the NBA for more than a decade and will turn 37 this July, Birdman possesses a youthful, not-your-average-Joe appeal that attracted Hard Rock Energy.

“We thought he’d be a real good fit because he’s kind of a young person’s guy,” said Marc Solomon, general counsel for the Seminole Tribe of Florida, Inc. “He has a lot of energy and he’s a little bit off-center and that’s what the whole energy drink category is. So you need somebody who’s got an image out there for the young people in the energy market. I think it’s a good combination; we’ve just got to keep building on it.”