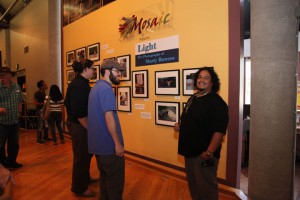 BIG CYPRESS — A radio host entertains and informs but rarely provides inspiration for an artist. Marty Bowers, however, was motivated to explore photography because his favorite radio personality, Howard Stern, found a new hobby.

Bowers’ interest in photography grew into a serious passion, and he has found success doing something he loves. The Ah-Tah-Thi-Ki Museum displayed his first exhibition through Sept. 10 and held a grand opening in conjunction with the Museum’s 15th anniversary celebration on Aug. 21.

“I picked up the camera because of Howard Stern,” said Bowers, of Tampa. “But I also took classes and learned what photography is all about.”

Photography isn’t Bowers’ only method of artistic expression; he learned to draw at a young age and also writes poetry. But this was Bowers’ first public show, and he did not know what to expect. During the opening, he talked to people and explained the images, adding insight and depth to their visit.

“It was a little scary at first,” he said. “But I’m really enjoying it. I love being the center of attention.”

Museum visitors spent time taking in the mood of each photo.

“They are gorgeous,” said Lawanna Osceola, of Hollywood. “I love how he interprets the scenes and brings you into the photographs.”

“I like the photos a lot,” added Museum member Guy LaBree, of Arcadia. “I met Marty here, and I’m glad I did.”

People in public places inspire Bowers’ photos, and he often goes where people congregate, such as events, rallies, malls and Starbucks, to capture images.

The photos on display include an image of two men with cotton candy at Tampa’s Santa Fest event. The men are homeless, and the organizers gave them T-shirts and cotton candy and then put them to work.

“That’s why I enjoy that shot so much,” Bowers said. “They had a chance to work.”

Bowers, who grew up in Big Cypress, said that for his next photographic outing he planned to attend the Republican National Convention in Tampa – but not the main event.

“I’m going to where the demonstrators are,” he said. “I’ll find out where they are and jump on my bike and start shooting.”