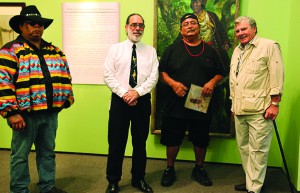 BIG CYPRESS — In a collaborative effort, the Ah-Tah-Thi-Ki Museum and The Patricia & Phillip Frost Art Museum of Florida International University presented the “Reflections across Time: Seminole Portraits” exhibit at the Big Cypress Reservation. Bridging together more than 150 years of Seminole history, the exhibit features the artwork of notable 19th- and 20th-century Seminole artists and showcases traditional and modern times and styles.

Tribal and non-Native artists, Museum staff, representatives from the Frost Museum and others came together for an artists’ reception held on Sept. 6.

“The Seminole culture has been captured beautifully by non-Native artists, but the Seminole artists themselves are a going commodity,” Ah-Tah-Thi-Ki Museum director Anne McCudden said. “They are fine artists and should be recognized in the same breath as the 19th-century artists.”

Seminole artists Brian Zepeda, Elgin Jumper, Henehayo (Leroy) Osceola and Jimmy John Osceola all have artwork displayed in the exhibit, which runs through Nov. 4. They have painted for several years, and throughout their careers, years of tradition, culture and creativity have surfaced in their work.

Jumper said he enjoys showing his work in the exhibit.

“It’s really good to be involved in this kind of stuff because it shines a positive light on what the artist could be,” he said. “And it keeps the expression of our culture.”

The exhibit compares and contrasts the visions of 19th-century artists who painted Seminoles leaders in an attempt to record a “dying race” with 20th-century Seminole artists who paint them to show their pride and creativity for their culture and history.

“I hope people realize and see the continuity of culture and how identity can be manipulated,” McCudden said.

“Of course, we would like the general public to come in and to see how we work with other museums to bring quality,” she added.