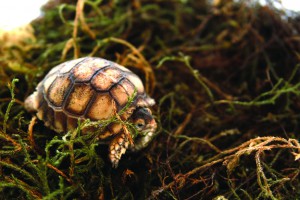 After the only female tortoise laid her eggs six months ago, wildlife staff believed that the eggs were infertile. By chance, wildlife assistant Justin Igualada happened to pass by the habitat and see the 2-inch African spurred tortoise.

“If I had walked by any later, he probably wouldn’t have survived,” Igualada said.

That’s because hatchling tortoises have many predators – especially birds. The parents don’t protect their offspring after being hatched, which gives other animals an opportunity to feed on the tortoise. Luckily, Oakley – named by wildlife manager John Jones after the sunglasses, not the village – was found in time to be put in a safer place until he can better protect himself.

The African spurred tortoise is the largest tortoise in the African desert and is the third-largest of the species. A misconception is that all members of the species are turtles. The main difference between tortoises and turtles is that tortoises live on land, while turtles live in water.

Oakley has the possibility to grow to be more than 100 pounds and will continue to grow the remainder of his life – up to 100 years. Although the tortoise drinks water, it is mainly hydrated through the vegetation it eats. The five adult tortoises at Okalee Village are fed up to a total of 50 pounds of lettuce and other vegetation a day. In the wild, many African spurred tortoises survive off of eating cactus.

Today Okalee Village is the home of 60 wildlife animals, including, snakes, birds, otters, alligators and other reptiles. Okalee Village is also fortunate to house two endangered species: the gopher tortoise and black bear.

Currently, Okalee Village is in the beginning stages of moving to a larger location in the foreseeable future. In order to receive more visitors, the facility will move to the open lot across from the Seminole Trading Post in Hollywood.

“We don’t get a lot of walk ins; we get a lot of school groups,” wildlife manager John Jones said. “We had 100 kids here this morning.”

The new Okalee Village will have 8 acres for the wildlife, including Oakley and parents, and for visitors to enjoy.

With the discovery of Oakley, the wildlife staff decided to closely watch the remaining eggs and incubate them at the village. That means Oakley the tortoise may receive a new brother or sister soon.