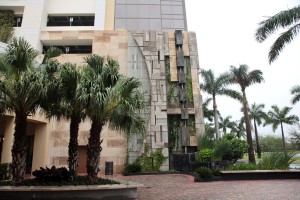 Since its completion in 2012, the wall has saved the Tribe approximately $12,000 a year, according to Florida Power & Light.

“It was a collaborative effort between us and the city of Coconut Creek, which has guidelines for the public display of art,” said Steve Bonner, general manager of Seminole Casino Coconut Creek. “We wanted to set the standard and have something we and the city could be proud of. Instead of a big giant box you park cars in, it’s a nice space.”

The 40-foot-high wall on the southeast corner of the garage was conceived as a living system to improve the surrounding environment by filtering water from retention ponds on the property. The filtration system removes excess nutrients, metals and oils from the pond water.

“It’s a great project; it’s one of a kind,” said Jason Bregman, associate with Michael Singer Studio. “When it rains, the ponds fill up and that water gets dumped into the canal system, which goes into the Intracoastal and the ocean. That’s where our fish population is raised, like a nursery. It’s also where a large part of the coastal biodiversity of Florida is found. The water quality in the canals is poor; if everyone did more to filter their ponds, the waters and fisheries would be stronger and cleaner. The Native American populations are the ones who knew this well and knew it first.”

The system filters 150,000 gallons of water per day, first through the wall’s ultraviolet filters and then again by native plants at the base of the wall. A solar canopy on the roof of the garage generates about 23 kilowatts of power per day, more than enough to power the pumps, filters, lights and elevators in the garage.

Native plants used by Seminoles for generations are incorporated into the design, including coontie and cattail.

“The aquatic plants have been scientifically proven to be effective for filtration and getting bacteria out of water,” Bregman said. “Their root systems foster beneficial bacteria which also filter the water.”

The biofiltration garden at the base of the wall uses technology found in aquaculture and fish farming. Aqua cubes in the aquatic plant bed bubble the water, adding oxygen to it. The system basically treats the water like a big fish tank.

“It’s interesting that the plants are native – it really speaks to Florida,” Bonner said. “It’s been a success. We had to play with the water flow, but it’s been pretty maintenance-free. It really does take care of itself.”

The deep retention ponds hold a lot of water, so it can take months to filter, depending on the amount of rainfall.

“Our environment is out of balance,” Bregman said. “This is a small piece, but if we all did our share it can have a huge impact and clean our waterways. Everything is interconnected in South Florida.”