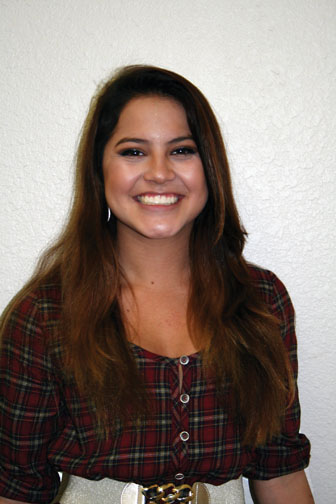 OKEECHOBEE — Most 15-year-olds are busy texting, hanging out with friends and anxiously awaiting their 16th birthdays. Apolonia Nunez, known as Apple to friends and family, is no exception. She does all those things. Except, she is far from typical.

Next May, Apolonia, the daughter of David and Anita Nunez, will likely become the youngest Tribal member to graduate with her associate of arts degree. She has been a full-time student at Indian River State College (IRSC) since August 2013.

“It was one of the best decisions for my education,” she said.

Apolonia, who grew up in Okeechobee, has always excelled academically – she tested at a gifted level, one point away from genius, in the second grade – but she struggled socially. She said being an introvert made socializing with kids her own age difficult.

“I recognized she was so intelligent that it was bothering her socially,” her mother, Anita Nunez, said. “It made me feel nervous.”

In a seven-year span, Apolonia switched schools 13 times in an effort to find the school that “clicked,” she said.

It wasn’t until her mother suggested dual enrollment classes at IRSC during her ninth-grade year that it finally clicked.

“The idea was crazy, so out of the ordinary,” Apolonia said. “It sounded so far-fetched.”

Anita had tried to enroll her oldest daughter Alicia in the seventh grade but the Okeechobee school system didn’t allow it at the time. Only 11th-graders were eligible to take college classes. But this time, Anita knew how to qualify her youngest daughter.

In order for Apolonia to be eligible for dual enrollment at IRSC, she had to be home-schooled and had to pass the Postsecondary Education Readiness Test (PERT).

Apolonia passed the reading and writing portion of the PERT with flying colors. Math, not one of her favorite subjects, posed a challenge. But Apolonia enlisted the help of tutors, studied hard and eventually passed math as well, making the start of her college career at 14 one step closer to reality.

Her mother helped with home schooling, narrowing down all the college classes that would count toward high school credits and associate degree credits. She also found a teacher to oversee Apolonia’s home-school curriculum and sign off on her classes upon completion.

During her first semester at IRSC, Apolonia took five classes and was on campus three days a week. She said she finally felt at ease and enjoyed the challenges of college.

Picking her own classes allowed Apolonia to have more flexibility with her curriculum. She has taken a culinary class, as well as oceanography. Along with fun and intellectual electives, she also balances her semesters with college freshman- and sophomore-level classes including English, critical thinking, life science and American history.

Apolonia admitted she had to learn how to adjust to college classes. She said she wasn’t used to having a month to work on school projects. But she learned quickly why students receive extra time for certain assignments.

“At first it caught me off guard,” she said. “I crammed my first essay the night before. I definitely learned my lesson on that. It really challenges your self-control and your self-discipline.”

Since then, Apolonia has continued to excel in college and has learned to balance her schoolwork with everyday life. She pushed forward and is passing through high school requirements so she can concentrate on college.

“My focus is not high school,” she said. “My A.A. and bachelor’s are my focus and everything else is just the building blocks for college.”

Apolonia is a year ahead in high school and hopes to finish all her requirements this school year.

If she does, she can graduate with her high school diploma and her associate degree in May.

“Apple is one of a kind who is a good example of hard work and dedication,” said Higher Education coordinator Linda Iley. “She is definitely a pride of the Seminole Tribe of Florida.”

Following her associate degree, Apolonia plans to pursue a bachelor’s in criminal justice from IRSC. She hopes to transfer to the University of Florida to work on her master’s and prepare for law school with the hope of returning to the Tribe and working as a judge in its court system.

“I’ll always be thankful for the Tribe because they are the reason I have this opportunity,” Apolonia said. “Now that they have the whole court system it honestly opens up a whole opportunity not only for me but any other Tribal member who wants to do something in criminal justice.”

Apolonia encourages other Tribal students to take advantage of the education opportunities that the Tribe offers.

“Even if you don’t excel at education, even if you don’t get straight A’s, it doesn’t mean you’re dumb,” she said. “It does not test your success rate and your ability to do things. If you just take it one day at a time and slowly knock things out, you’ll get closer and closer to your goal.”