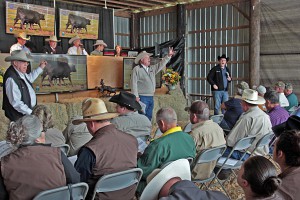 FAIRMOUNT, Ga. — During the Salacoa Valley Farms spring cattle sale March 22, about 50 Tribal members got front-row seats to the event that generated nearly $500,000 for the Seminole Tribe. The Board of Directors purchased the Georgia-based farm in December in hopes of improving the Tribe’s cattle program.

“The average selling price was higher than the last sale,” said Alex Johns, Natural Resource director who oversees the Tribe’s cattle program and Salacoa. “There were some bargains, some brought what they were worth and some exceeded our expectations. It was a good turnout and there were a lot of Florida buyers, so a lot will be going back to Florida.”

With the purchase of Salacoa, the fourth-largest purebred Brangus ranch in the country, all Tribal members are now cattle owners, but many who also have their own herds attended the sale and toured the 4,500-acre farm.

“This is what we needed to do,” said Stanlo Johns, who purchased his first cattle in 1959 and has a 350-head herd in Brighton with his son Todd Johns. “The industry changes about every 10 years, and the people who adapt quickest stay afloat longer. I think having these guys stick their necks out and go for it is the best thing to happen with the Tribe. We should have done this 40 years ago.”

Joe Osceola, 91, who has raised cattle on Big Cypress for most his life, agrees.

“This is moving the Tribe ahead,” said Osceola, who takes care of his 150-head herd every day and has no plans to stop. “The cattle business has improved a lot over the last 25 years. This is a good thing.”

Primarily a seed stock operation, Salacoa produces bulls and heifers for cattle owners who want to upgrade their herds. Salacoa bulls’ superior genetics are widely acknowledged in the industry. The Board ultimately aims to improve the genetics of its cattle program.

“I like seeing this good genetic breed because eventually we’ll have these genetics,” said Todd Johns, who runs his father’s herd in Brighton. “As a producer, it helps to sell our cows to others.”

Better genetics equals a better beef product for the consumer.

“When we rolled it out, people couldn’t believe it was from Florida,” Alex Johns said. “We showed customers we can produce a high-quality product.”

“I don’t know anything about cattle, but I do know about business,” President Sanchez said. “Alex knows everything about cattle and understands our long-term vision and the steps we take to move us in that direction.”

He said he was glad Tribal members viewed the farm personally.

“I hope the individual cattle owners can see the value and be proud,” he said. “They are part owners, as are the rest of the Tribe.”

Prospective purchasers came from across the country for the sale, which was an auction. Others placed bids for the cattle online and by phone. Most of the cattle sold will remain in the southeastern U.S., but some were purchased by bidders from as far away as Texas.

The sale featured 60 cows and 65 bulls. Many of the Tribes 67 cattle owners wanted to purchase cattle for their own herds, but lively bidding shut most of them out. Polly Hayes and Martha Jones both came to buy heifers – both were outbid.

“I think this will be very beneficial to the Tribe,” said Hayes, the Tribe’s 4-H coordinator. “I bought some bulls before the Salacoa purchase, but they aren’t as nice as these. They have some beautiful animals here.”

Rep. Osceola, Hayes’ son, comes from a long line of ranchers, starting with his grandmother Lizzy Buck, one of the first cattle owners. After inspecting the cattle for himself, he said understands why they’re so sought after.

“I’m here absorbing everything and looking at the economics of it,” he said. “I’m glad my uncle Joe (Osceola) gets to see the progress we’ve made and know that his hard work is paying off.”

“They were better quality than what we have back home,” Todd Johns said. “It was a real upgrade and I’m happy with the prices. I got what I wanted.”

All attendees at the sale had at least one thing in common: pride in their animals.

“Ranching is like a big family,” Alex Johns said. “We all have the same passion and values. I think if all the Tribal members could see this, they would be proud of it.”