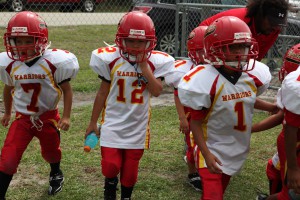 BRIGHTON — Eight-year-old Aubee Billie is crossing the gender boundaries and proving girls can do anything.

Many know Billie as the former 2009-2010 Little Miss Seminole donning beautiful dresses and riding in parades. But today, Billie has traded in her crown and patchwork for a helmet and pads.

Weighing in at 68 pounds, Billie is the lone girl on the 75 and under Brighton Warriors pee wee football team. And tackle football at that.

“I wanted to show them how tough I am,” Billie said.

Billie, a student at Pemayetv Emahakv, is known to her family and friends as a girly girl, so when she asked to play football it came as quite a shock.

Billie said that when she went to her parents, Chairman James E. Billie and Maria, for permission to play, they didn’t know where it was coming from.

Her brother Eecho recalled how Billie attempted to play soccer but quit after only the second game.

“She’s not a sport-like person,” Eecho said. “She quit soccer because no one would give her the ball.”

But Billie said she wanted to try something new. Cheerleading: she’s done it and it wasn’t for her.

With her helmet on, Billie fits right in and looks disguised as one of the boys. Billie has even fooled some of her friends on the team.

“Ramone didn’t even know I was a girl until I took my helmet off,” Billie laughed.

Although the Warriors pee wee league is full-contact tackle football, Billie said she doesn’t feel scared about getting tackled: “You just have to push them out of the way.”

Billie may spend her afternoons and weekends on the football field with the boys, but she is still a girl at heart.

“I wear pink; I wear nail polish,” Billie said. “I just want people to know that girls can do anything a boy can.”

The Brighton community created and sponsors four different age divisions in the pee wee football league. Youth from surrounding counties including Okeechobee and Glades County join Tribal youth to make up the Warriors teams. The Warriors host games on the Brighton Reservation, as well as travel to nearby towns to compete.