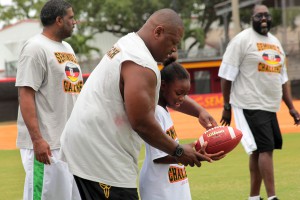 HOLLYWOOD — Members of the Tribe tend to be big football supporters; many root for the Miami Dolphins, Florida State Seminoles and the University of Miami Hurricanes. But fewer play the game than cheer for it. Tribal kids recently had some hands-on football experience as they ran professional-style drills at the Seminole NFL Challenge on June 1 in Hollywood.

The day was led by former NFL player Lorenzo White, who was a running back for the Houston Oilers and Cleveland Browns during his eight-year career.

“We are showing them the same drills you do in high school, college and in the pros,” said Lorenzo, who has traveled around the country conducting football camps. “It’s a real fun day. We do the drills playfully, which gives the kids rewards and some insight into what it takes to be a football player.”

White was joined by a cadre of former NFL players including William Roberts, a former offensive lineman with the New York Giants, New England Patriots and New York Jets. Other coaches were David Bowens, former defensive end with the Miami Dolphins, New York Jets and Denver Broncos; Eric Robinson, former running back with the Minnesota Vikings; and Butch Rolle, former tight end with the Buffalo Bills. These experienced athletes all coached the kids through the drills.

“We want them to appreciate the game and learn something,” Bowens said. “If I can teach one kid one move, he’ll have it for the rest of his life. He can put it in his football tool box.”

The kids enjoyed throwing and kicking the ball, as well as completing the obstacle course to build their skills. Some kids were familiar with the game; for others, it was the first time they touched a football.

“I like football,” said Junior Puente, 8, who has played the sport before. “You have fun and get to know the kids on your team.”

Hollywood Recreation site manager Brian Dodd was pleased with the turnout and would like to offer flag football to the kids as an activity.

“It teaches the hard work,” Dodd said. “When you get knocked down, you have to get up. We’re glad to have these guys here; the kids look up to them.”

After a day of challenging drills, the kids were as enthusiastic as when they started.

“There’s nothing like competitive sports,” Bowens said. “The lessons you learn, the camaraderie, the blood sweat and tears, and personal relationships are things you keep for a lifetime.”