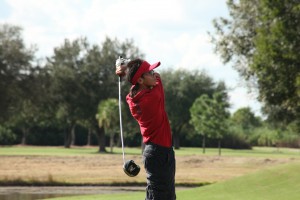 BIG CYPRESS — Although the golf team at Ahfachkee School completed their third season without a winning record, they have accomplished a great deal in a short time.

“They are doing a tremendous job,” head coach Amos Mazzant said. “Our goal was to have the team improve with each match, which they have. They are also starting to have more fun at play because they see they have accomplished something on the course.”

Over the course of the season, the team of 12- to 17-year-olds has taken about 50 points off its total score, a significant accomplishment for such a young team. Most of the seven-member team only began playing golf for the first time in August, and they must also practice in a cow pasture and drive 40 miles to play on a real golf course.

“The experience has been really good,” Nashoba Gonzalez, 13, said. “I’ve learned patience and made friendships.”

Only one player, Quenton Cypress, golfed on the team last year, and he brought his experience to the season.

“My goal for the season was to hit a birdie,” Quenton, 17, said. “I finally hit one and it was awesome. I hit a chip shot and got the hole – that’s how I got my birdie.”

At a match at the Clewiston Golf Course on Sept. 27, Ahfachkee played Clewiston, Moore Haven and Labelle.

“It’s amazing that after only five or six weeks they are hitting the shots,” Mazzant said. “For never having a club in their hands to how they are playing today is a beautiful thing.”

Most of the kids took their first golf lessons from Mazzant before joining the team and had never stepped foot on a golf course. They learn from the experience they get during matches and produce good golf shots more often, he said.

Mazzant has coached golf for about 30 years, mostly in his home state of Pennsylvania. He approaches coaching with more than just a win-and-loss record; he teaches students a sport they can enjoy for the rest of their lives.

“They may not be the best team out there, but they have the best spirit and heart to do it,” Mazzant said. “You can always measure things in wins and losses, but you cannot measure the hearts of these kids that way. They take a lot of pride in what they do and work hard to improve. It’s been a pleasure to work with them and very rewarding.”

After the season ended, Dasani Cypress and Quenton Cypress competed in the Florida High School Athletic Association Class 1A District 17 tournament on Oct. 15 at the Port Charlotte Country Club in Fort Myers.