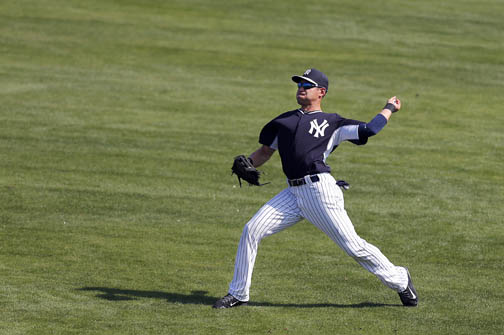 As a kid growing up on the Warm Springs Reservation in Oregon, Jacoby Ellsbury dreamed of being a baseball player. He spent hours hitting balls off a tee made just for him by his father, igniting his passion for the sport.

“Living on the reservation I was always motivated to excel,” said Ellsbury, a member of the Navajo and Colorado River Indian Tribes. “People always told me the chance of playing was low; they said to pick a real job. I always wanted to play baseball, so I strived for it and worked hard for it.”

Ellsbury, 30, has spent his life chasing the dream and has two World Series championships to show for it, both with the Boston Red Sox in 2007 and 2013. He became a free agent in the offseason, and in December, he signed a seven-year, $153-million contract with the New York Yankees, where he’s the leadoff batter and center fielder. Among outfielders, only Manny Ramirez and Matt Kemp have signed more lucrative contracts at $160 million.

Baseball plays an important part of his life, but serving as a role model to Native American kids does as well. Ellsbury combined those passions and teamed up with Nike in 2011 to run the N7 Jacoby Ellsbury Baseball Camp on the Salt River Pima-Maricopa Indian Community in Scottsdale, Ariz.

“This is a way to give back,” Ellsbury said. “If the kids take one thing from camp, it’s that they can work hard, go to school, get good grades and have a dream and a goal in mind.”

Nike N7 brings the benefits of sports to Native American communities. Proceeds from the purchase of N7 products support the N7 Fund, which helps physical fitness and sports programs on reservations.

“We want to bring the kids in for a fun and exciting experience with Jacoby Ellsbury and have them leave feeling inspired,” said Tessa Sayers, with Nike N7 operations. “The skills they learn at camp they can do at home; they don’t always need a lot of equipment. We want them to know being physically active is fun.”

The camp, for 8- to 15-year-olds from 13 Arizona reservations, is held at the same complex the Arizona Diamondbacks and Colorado Rockies use for spring training. In January, 120 kids came out to learn from the best in the game.

The Diamondbacks lent their coaches to the camp, and Ellsbury brought a few Major League Baseball friends to help out. Cody Ross, formerly of the Red Sox and now with the Diamondbacks, Darnell McDonald, also a former Red Sox player who recently retired, and Eric Young Jr., a former Rockies player now with the New York Mets, added their expertise to the camp.

“At the beginning of camp, the kids are shy,” Ellsbury said. “But then they open up and have fun. We want them to move around and get active.”

Health issues such as diabetes plague Indian Country, so Ellsbury encourages kids to adopt healthy lifestyles by getting off the couch and staying active.

Ellsbury has never seen his Native American heritage as a limitation. He always knew he would have to put in the time and hard work to achieve his goal.

“I’m very proud of my heritage,” he said. His father, Jim, is white; his mother, Margie, is a full-blooded member of the Navajo and Colorado River Indian Tribes. “I was always determined to succeed.”

Ellsbury is influenced by a variety of role models. He admires his parents for the sacrifices they made for him and his three brothers. Watching sports stars Ken Griffey Jr. and Michael Jordan also motivated him to succeed.

His competitiveness compels him to win whatever game he plays – even when it was cards, video games or ping pong as a child. He wants to be the best and sees his greatest achievements as the two World Series wins.

“You have to be mentally strong to play this game day in and day out,” he said. “You play 162 games, spring training and the postseason. There are a lot of ups and downs. Holding that trophy is the greatest feeling. Once you win, you want to experience that again.”

The grind of the season can pose a challenge for Ellsbury, a self-described perfectionist. He is an impressive .300 lifetime batter, but to him it means failing 70 percent of the time. His support group, which includes his wife, Kelsey, keeps him levelheaded.

Ellsbury’s enthusiasm for the game has never wavered.

“I love the excitement of the fans, the kids at camp, making a diving play and seeing a dad bring his son to the game,” he said.

As a child, Ellsbury attended baseball games with his father, who explained what the players were doing on the field. He sees kids watching him in the same way now.

Ellsbury believes everyone can find success. He encourages youth to start with a dream, make a goal and devise a plan to achieve it.

“Try to do everything you can to accomplish it,” Ellsbury said. “It’s important to have a dream but realize there will be sacrifices you have to make along the way. The dream can be anything; a teacher, doctor, anything. Just learn what you need to do to accomplish it and work toward it.”