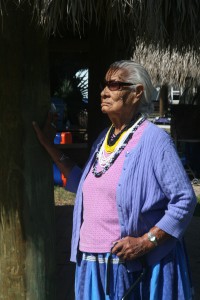 BIG CYPRESS — Alice Billie is a throwback to another age – a walking, talking anachronism. From her hair twisted into a bun on top of her head to her long Seminole patchwork skirt, she appears to have walked out of a postcard from the early 1930s. Quite agile for a woman older than 90, she stands tall as she takes a morning stroll around her Big Cypress yard for exercise and then travels to the Senior Center for a luncheon with her many friends.

To the casual observer, Alice appears to be non-communicative as she sits quietly, staring across the room, but she is actually a treasure chest of Seminole history just waiting to be opened. The simple key to her priceless memories is a smile, a gentle hug or a pat on the hand, and she will share her lifetime of adventures.
Alice was born into the Wind Clan in a Seminole camp at Black Hammock, in the Everglades southeast of Ochopee in Collier County, sometime before 1922. The daughter of John Billie and Margaret Huff Dixie, she had numerous brothers and sisters who have distinguished themselves within the Tribal community.

With a limited command of English, Alice had her son, Ronnie Billie Sr., translate as she journeyed back to her childhood.

“My father hunted alligators, deer and raccoons for hides and meat to trade for bullets, flour, salt, sugar, cloth, candy and tobacco. All of us kids would run to get in my father’s dugout canoe when we knew that he was going to the trading posts in Everglades City. It would take all day to get there, but we knew that there would be candy and all the wonderful things in the store to see.”

The Bureau of Indian Affairs has assigned Alice a birth date of Jan. 1, 1922, but this is contradictory to her vivid memories. She recalls climbing on the loose dirt dike being built by the walking dredge for the future Tamiami Trail and following it with her family into Everglades City for a day of trading. Construction of the Trail in her vicinity took place around 1923, and she had already made the trip by canoe for several years.

With the opening of the Trail in the late 1920s, produce farms began to spring up around Ochopee, and Alice’s father moved his family closer to the community so that they could find work in the fields. The first car that she ever saw was a Ford Model T, and her brother, Frank J. Billie, was scared to death of the vehicle.

“My mother moved around a lot, and I stayed with my father,” Alice said. “He was a strong, hard man and had always made his living off the land, but he was also very gentle and kind. One time when we were moving through the swamp, he was walking with a heavy pack on his back. I started to cry because I was afraid of the big bugs on the leaves of the plants. Even though I was a heavy load, he came back and carried me for a long ways to the edge of the swamp on top of his pack.”

Sometime around 1940, Alice was taken in an old flatbed truck over the bumpy dirt road that ran from Immokalee to Big Cypress for what she had been told was a short visit. Much to her surprise and anguish, she found that she had been tricked, and she was left to live at the new reservation where there were very few people. 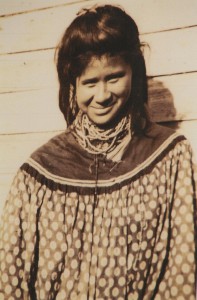 She spent the next 25 years living in various camps scattered throughout the area and raised her four children as a single parent. Her first three children were born in the woods, but by the time Ronnie came along in 1954, she made his delivery at the hospital in Clewiston.

Life wasn’t always easy for Alice as she made her living working in the fields, making dolls and sewing patchwork, but it was very rewarding, and she looks back upon it with a smile. However, there is one thing that she regrets. “When I was a little girl, the people in Everglades City said they would teach me to read and write. My uncle and grandma told us that we could never hold a pencil in our hand because it was a white man’s trick to take us away.”

“The government made a wood building where the water tower is today and sent a man to teach the children of Big Cypress,” Alice said. “The teacher was always happy and smiled and he made the children happy, too. That is why they called the school ‘Ahfachkee.’ They only had first through fourth grade, and then the kids had to go to Clewiston. Education is important, and I sent my children to school to learn what I was not allowed to do. I want them to have a good life.”

Alice’s son Ronnie Billie Sr. recalls the stories his mother passed on to him.

“We were riding along in silence on State Road 29 near Copeland a few weeks ago,” Ronnie Billie Sr. said.

“Suddenly, my mother pointed to the east side of the road and said that her father cut down a huge cypress tree there and made it into a dugout canoe when she was young. There used to be some very big trees here, but the logging companies took them away many years ago. Her brother Henry John Billie learned how to make canoes from his father and grandfather, but very few people know how anymore.”

“I love taking my mother back down to the old Trail area because she always surprises me with the things that she remembers,” continued Billie. “Passing the old logging and farming community of Copeland, my mom told me how she used to live in a camp beside the Deep Lake Railroad line in the 1930s. They liked to swim in the canal beside the tracks because the people on the train would throw them candy. Her grandmother tried to keep them out of the water, but they still went back. One day, she scared them when she said that a big otter was in the water and he would eat their toes. They never swam there again.”

It wasn’t until the early 1970s that Alice had a permanent camp of her own along the Josie Billie Highway in the middle of the Big Cypress Reservation. This is where she lives today in a cement block house constructed for her by the U.S. Department of Housing and Urban Development.

However, she continues to spend considerable time in the chickees in her yard as she fondly remembers the lifestyle to which she was accustomed.

It makes Alice very sad that the camp life is gone because everyone was part of the daily activities, regardless of their age, she said.

Now, the children are in school, the adults are on the road all the time, and the seniors sit alone with their caregivers. The next generation is losing their language, and she fears that their children will not remember where they came from and there culture will soon die. She would love to have little children around to sit in her lap, and she would tell them about their ancestors.