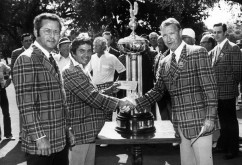 TAMPA — Rod Curl doesn’t remember every shot that earned him a victory at the Colonial National Invitation on a Sunday afternoon in May 1974, but he does recall everything that came his way as the tournament winner: the shiny trophy he proudly grasped; the colorful plaid winner’s jacket he donned; the $50,000 first-place check he deposited; and the instant recognition as a Native American golfer who won on the PGA Tour.

“That was a great feat. A lot of Native Americans over the years have followed me. I’ve met some nice Indians,” said Curl, 71, a member of Northern California’s Winnemem Wintu Tribe who plays and practices at The Claw at University of South Florida and TPC Tampa Bay, and enjoys evening poker at Seminole Hard Rock Hotel & Casino Tampa.

Also prominently imbedded in Curl’s memory bank 40 years after his win at the Colonial in Fort Worth, Texas is the quality of the field he defeated at one of golf’s most respected tournaments.

Curl, of Tampa, said people forget that the Colonial in 1974 was the first of that season’s three so-called “designated tournaments,” which meant the field was loaded because the Tour required its top names to be there, a mandate that no longer exists.

Although he never won a major – his best was a tie for 15th in the 1975 Masters – Curl conquered a field that was as strong as a major. His victory at age 31 came against golf’s elite, including Raymond Floyd, David Graham, Hubert Green and, of course, Jack Nicklaus.

Notching a victory against Nicklaus, who finished second, remains a satisfying moment for Curl.

Late in the final round, Curl emerged from a three-way tie for the lead – which included Nicklaus – by making a lengthy birdie putt on No. 16. Curl notched pars on the final two holes to finish with a 68 and a 4-under-par 276 total for four rounds. After Nicklaus bogeyed the 17th, Curl had the comfort of being in the clubhouse with a two-shot cushion as the Golden Bear played the 18th.

“I was praying he would make birdie just so I could say I beat Jack Nicklaus by one shot,” Curl said.

His prayers were answered. Nicklaus birdied to finish one shot behind the 5-foot-5 Curl, whose size and late start in golf at age 19 didn’t hinder his unlikely metamorphosis from construction worker to PGA Tour winner.

Curl wasn’t surprised he played well in the final round. He already had two runner-up finishes earlier that season in San Diego and Houston.

“At that period in my life, I knew I would have a good round. I had control of the ball,” Curl said.

Born and raised in Redding, Calif. – 200 miles north of San Francisco – Curl learned valuable lessons about hard work from his parents that he carried into his golf career. He said both his parents were Wintus who lived on the Tribe’s reservation, but before Curl was born the family moved off the reservation. He recalled his father, West, as being “a great worker” and his mother, Lala, as being an Indian activist who fought for land in California.

“My mom was so active. She was away a lot … fighting for the cause,” Curl said.

Sibling generosity helped Curl’s pursuit of a career as a pro golfer. Esther Russell lent her younger brother $12,000 so he could chase his dream.

“A wonderful sister,” Curl said. “She sponsored me. I had no money. I was a construction worker. Without her, I’d probably still be digging ditches.”

A self-taught golfer who also played baseball and pool, Curl made a rapid ascension from carrying shovels to hitting irons. In 1966, just four years after he started playing golf, he earned a spot in the U.S. Open at Olympic Club in San Francisco. Curl,  23 at the time, seized an opportunity to join Arnold Palmer in a practice round.

“That was one of the greatest highlights in my career. A little boy from Redding, Calif. playing with Arnold Palmer,” he said.

Curl said he hooked the ball a lot in those days, so it wasn’t too much of a surprise that his grip caught the attention of Palmer.

“Arnold said to me, ‘Son, you better do something about that grip,’” Curl recalled.

As memorable as the practice round was for Curl, the tournament featured a notoriously harsh conclusion for Palmer, who surrendered a seven-shot lead with nine holes left and lost to Billy Casper in a playoff.

After the victory in Fort Worth, Curl was ready to hoist more trophies, but he never revisited the winner’s circle on the PGA Tour. The momentum he built up in 1974 was derailed that summer because of a wrist injury that never properly healed. The mishap occurred when Curl decided to remain on the practice range at the B.C. Open in New York after his caddie had taken Curl’s car to do laundry.

“I hit too many balls on a hard ground. I must have hit 10 or 12 baskets. I wanted to get better,” Curl said. “Ever since then, I’ve been hurt. It still hurts.”

Curl still flirted with wins. He finished second to Johnny Miller at the Kaiser International Open in 1975 and tied for runner-up with Tom Watson and Bill Rogers in 1978 at a tournament in Japan. A two-under-par 70 had Curl tied for eighth after the first round of the Masters in 1976, but he missed the cut with an 82 the next day.

The Colonial and Fort Worth have always remained close to Curl’s heart. His 31 appearances – second only to Ben Crenshaw – serve as proof of just how much the tournament and city mean to Curl.

“Once you win a tournament, they remember you. That’s why I kept going back. They are really friendly in Fort Worth. It’s a first-class tournament,” Curl said.

Although it’s been seven years since he last played in the Colonial, Curl is still having an impact on the tournament, albeit in a hereditary manner.

The Colonial’s unique Champions Choice allows the tournament’s previous winners to add two golfers from outside the PGA Tour to the field. Curl wrote letters to his fellow champions, lobbying for his son, Jeff, to be one of the choices. The champions agreed to pick Jeff, 35, to play in this year’s tournament, now known as Crowne Plaza Invitational at Colonial.

Jeff, who at age 3 performed in golf exhibitions with his father at tournaments, plays on the Web.Com Tour, a minor league breeding ground for players aspiring to reach the PGA Tour or return to it. Ironically, Jeff played in the 2012 U.S. Open on the same Olympic Club course that his father played in the ’66 Open.

Another son of Rod Curl, Rod Jr., is the golf professional at Hammock Creek Golf Club in Palm City, Fla.

For Rod Sr., the benefits of playing on the PGA Tour in the 1970s and ’80s extended beyond the ropes.

Thanks to an invitation from Hope, Curl attended a dinner with President Gerald Ford. When he finished runner-up at Andy Williams’ tournament, Curl was invited to a small party hosted by the entertainer.

“It all adds up to a wonderful life,” Curl said.

PGA Tour winner and Native American Rod Curl welcomes a chance to teach golfers who are serious about becoming better. He said he’s interested in helping golfers who are willing to put in at least 50 hours of practice with him. Curl can be reached via phone or text at 813-240-8512.