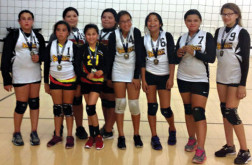 BRIGHTON — A young Seminole volleyball travel team picked up a few tournament championships and some valuable experience this season. Coached  by Jo Jumper, the 12U girls battled their way into the top brackets in most of their tournaments.

“They’re a young squad and there’s not many of them. I was proud of them. They did good across the board. We ended up in the gold brackets, which is good,” Jumper said.

Filled mostly with students from Pemayetv Emahakv Charter School, the team began practicing in November. By the time the season ended May 4 at AAU Regionals in Orlando, Jumper said the team had made great strides, proof of which came with first-place finishes at four Up On Top tournaments in Port St. Lucie.

“They play well together for being so young,” she said. “We have phenomenal servers. That’s one of the things we work on, as well as passing.”

Even when the Seminoles didn’t finish first, they still generated strong showings, such as a pair of third-place finishes in gold brackets – the highest level – at AAU tournaments in Orlando. In both events, they won three of their first four matches.

Although they didn’t reach the gold level in their final tournament, the Seminoles still capped a solid season on a decent note by finishing 21st out of 32 teams. The team opened with a 2-0 win against a squad from Winter Haven before encountering three straight defeats, two of which were decided by only a few points.

While some travel teams will continue to play year-round, the Seminoles will take a break from volleyball to concentrate on other sports, such as basketball and softball.

One benefit that comes with a young team is that the squad won’t lose anybody next season, which means the Seminoles should be even stronger next time they step on the court.

“They’ll all be back next year,” Jumper said.

The youth movement extended down to the travel program’s youngest squad, too.

“We did really well,” said Kelly Smiley, who coached the Seminoles 10U girls volleyball team with Dallas Nunez. “We are a very young team. We have a lot of 6-year-olds and 7-year-olds on the team that are just starting. We had our troubles, but we actually came out with a couple wins when we played in Orlando.”

During its final tournament of the season at the AAU Regional Championships May 3-4, the Seminoles dropped their first three matches but showed plenty of determination in the fourth match against Ocala Power United. The Seminoles lost the first game but fought back to capture the match by winning the second game 25-19 and the tiebreaker, 15-3. The Seminoles finished eighth out of 10 teams.

Smiley said the team showed improvement this season from start to finish.

“They’re catching on,” Smiley said. “We got a lot better towards the end. Next year we’ve got to pick it up where we left off. It was basically a learning experience because our girls are so young. They had more fun than anything. That’s what matters.”