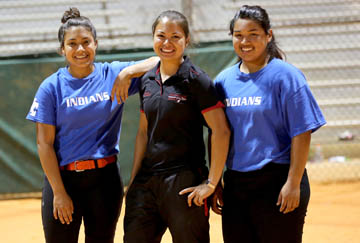 IMMOKALEE — When Vanessa Billie arrived at the plate with the game on the line in extra innings, Destinee Jimmie knew her teammate and cousin would come through in such a critical moment.

“It runs in the family,” Destinee said.

Indeed, Vanessa didn’t disappoint her fellow Tribal member or the rest of the Immokalee Indians High School softball squad on that early March evening as she delivered perhaps the team’s biggest hit of the season in a 5-4 eight-inning upset against Cape Coral.

Vanessa’s walk-off single against the district’s No. 1 team lifted Immokalee in more ways than one.

“Beating them was very important for our team. That was really a great boost for their confidence. It showed them that they can do it by beating that team. Vanessa did her part. She really executed her job,” said Destinee’s sister Cassandra Jimmie, a former Immokalee outfielder who returned to the program two years ago to serve as an assistant varsity coach and head coach of the junior varsity team.

Compared to a year ago when the Indians won only four games, significant gains were achieved this season in a 15-8 campaign that concluded April 15 with a loss to Lely in the Class 5A-District 12 semifinals.

Seminoles played pivotal roles in the resurgence this season with Vanessa and Destinee in the field and Cassandra on the bench. But wins and losses are only a slice of the story being written at Immokalee.

Cassandra said turning losses on the field into lessons in life is one way the coaches challenge the players.

“Yes, we do want to win,” said Cassandra, who assists varsity head coach Danny Garcia, “but as coaches we also want to teach them morals to be successful. We’re not here just to coach them about softball because after softball there’s a big world out there. We want to teach them to be ready for whatever they’ve got to face.”

At 23, Cassandra is only a handful of years beyond some of the players. Sometimes she is mistaken by umpires as a player. Make no mistake, she wants to be a role model to the girls as an alumna pursuing higher education and giving back to the softball program.

After graduating from Immokalee in 2010, Cassandra was crowned Miss Florida Seminole and attended Le Cordon Bleu College of Culinary Arts in Orlando. These days she is pursuing a degree in sports medicine at Keiser University in Fort Myers with aspirations of helping the Tribe and the high school. She already guides players in preseason conditioning workouts, a demanding period when a usually likeable coach might not be so likeable.

“Most of them hate me during that time more than they do now,” she joked.

“That was my biggest challenge, trying to teach a big group of girls about how to catch, how to throw, how to hit a ball within three weeks,” she said.

Perseverance and patience paid off. Nobody dropped out, which was treated as a cherished victory in itself.

“They all came back this year, which was really good,” Cassandra said.

On the varsity level, Cassandra praised the hard-working approaches that her sister and Vanessa bring to the field.

“Dripping in sweat, who wants to be out here conditioning, throwing a ball day after day? They’re out here because they love the sport. They love being interactive with other girls,” Cassandra said.

Destinee is a sophomore who starts in the same outfield that Cassandra used to cover. Claiming to have “a better arm” than her older sister, Destinee said she learned from watching the way Cassandra played years ago and now how she coaches.

“Never give up and always keep fighting,” Destinee said.

Destinee batted .255 with 13 hits this season. She registered multiple-hit games against Lake Placid and Golden Gate and a two-RBI game against Palmetto Ridge. Defensively, Destinee had an even stronger year.

“She’s progressed in the outfield,” Cassandra said. “Our (March 31) home game, all the balls were going her way. She was doing her job, catching the ball, backing up the shortstop. She really has a good attitude and supports the team.”

Ditto for Vanessa, who earned the nickname “the ball magnet” because she is prone to getting hit by pitches, something she’s become accustomed to after a black-and-blue season in which she was hit a team-high six times. It was almost fitting that a pitch smacked her in the right shoulder in her final at-bat on her senior night April 7 against Naples. She shrugged it off and headed to first base.

After the game, she smiled while reeling off where previous plunks have landed. 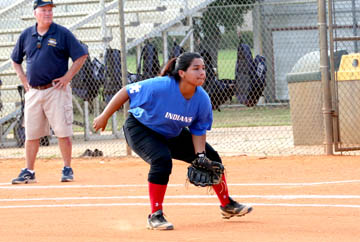 Being hit by the ball didn’t put a dent in Vanessa’s emotions on senior night. As the only player from the class of 2015, Vanessa had the spotlight to herself during a brief pregame ceremony. She was accompanied to the pitcher’s circle by her mom, Maria, and brother David.

The evening’s tributes included one of Vanessa’s youngest fans. Immokalee changed its uniform tops from red to blue in honor of Vanessa’s nephew, Josiah Osceola, a 3-year-old autistic boy. Vanessa said her teammates came up with the idea to wear the blue jerseys for her senior night, which coincided with April being National Autism Awareness Month.

“The captains and the whole team came together and decided to make these shirts. They surprised me. I literally cried. It means so much to me,” Vanessa said.

Vanessa did her part in trying to make it a victorious evening. She played errorless ball at first base and ripped an RBI single to right field that knotted the game at 2-2 in the first inning. Immokalee rallied to tie the game in the seventh inning before Naples pulled out a 5-4 win in eight innings.

After the game, Josiah was surrounded by the Immokalee players in the middle of the infield as he posed for photos while in the arms of Vanessa. Josiah wore a New York Yankees jersey, which is the favorite team of his mother, Esmeralda, who watched the game with about 10 family members.

“He loves coming to watch her play. He comes to every game,” Esmeralda said.

Next season Immokalee will have to fill the void left behind by Vanessa, whose final season included a .404 batting average with 17 RBIs, four doubles, one triple and 16 runs.

“Throughout the years, she’s progressed, not only as a player, but as a young woman,” Cassandra said. “She’s matured as a person. The whole purpose of the program is to teach them not only about softball but also about morals of life as well as being successful. She took in what we’re trying to teach her.”

Vanessa and Destinee will still be teammates outside high school. They plan to play for the Tribe at the NAYO softball tournament this summer.

While Destinee comes back for her junior season next year, Vanessa plans to attend Valencia College in Orlando with hopes of moving on to the University of Central Florida.

As for that winning hit against Cape Coral in the regular season, Vanessa said she didn’t initially realize it was a hit, but confirmation came when her teammates stormed onto the field and mobbed her.

“I was so proud of myself and my team for coming back and winning. I couldn’t have done it without all their support,” she said.

This season the Seminole trio of Vanessa, Destinee and Cassandra made others proud, too.

“I’m proud of having Tribal girls here,” said Elsa Zamora, the mother of Destinee and Cassandra. “They have a big impact on this community.” 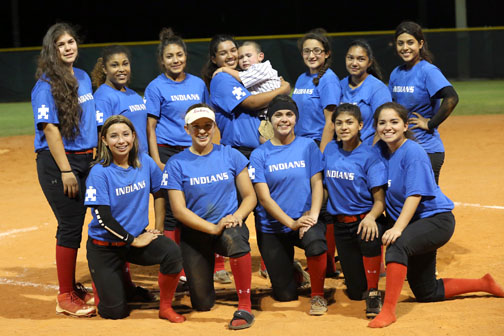