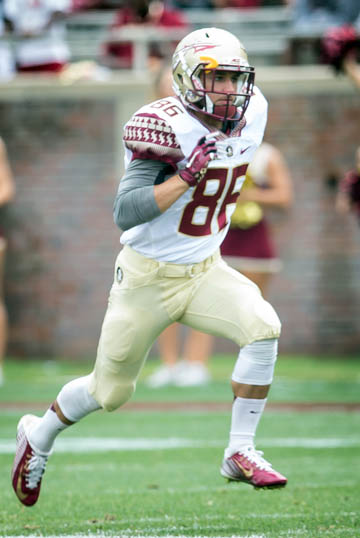 TALLAHASSEE — Playing football in Doak Campbell Stadium on a Saturday in April may not rival the importance and ambiance of a Saturday in October, but Florida State’s spring game served a few purposes for Justin Motlow as he enters his second year on the team.

Motlow played on special teams and saw action in the second half at wide receiver. He caught one pass for the Gold team, which defeated the Garnet, 38-17, in front of 17,250 fans on April 11.

The intrasquad scrimmage marked the end of spring practice. It was the first time Motlow has played in game action since late 2013 when he was a senior at Tampa Catholic.

“It felt good to be back,” Motlow said.

As a freshman last fall, Motlow served on the practice scout team. He didn’t see any playing time; however, he retained his four years of eligibility because he redshirted.

Now Motlow’s goal is to earn playing time, which is a challenging task considering he is one of 15 wide receivers on the spring roster. Winning a spot on kickoff or return teams might be a quicker route.

“I’m trying to work my way onto special teams first and then work my way up the ladder to receiver,” he said.

Midway through the third quarter in the spring game, Motlow made his only reception of the game. The 12-yard catch on a pass from quarterback Lucas Clark came close to midfield.

“It was pretty good. First catch in the stadium,” Motlow said.

With the departure of Jameis Winston for the NFL, FSU will have a new starting quarterback this fall. Sean Maguire, who has played in 13 games for FSU, appears to have the edge over less-experienced competitors heading into the summer.

“Right now I think Sean Maguire is winning the battle. He knows the offense better than the others,” Motlow said.

Last season, Motlow became a popular figure within the Seminole Tribe of Florida as its first member to suit up for FSU’s football team.

“It was surreal. It’s crazy to think I’m the first,” he said. “I have a lot of support. A lot of people tell me how proud they are.”

Florida State opens Sept. 5 at home against Texas State. The Seminoles return four starters on offense – including two wide receivers – and seven starters on defense from last year’s squad that was 13-0 before suffering a loss to Oregon in the national semifinals.