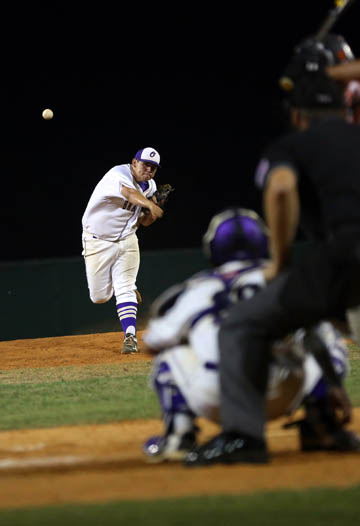 OKEECHOBEE — In the coming months, Layton Thomas will pack his bags to begin his college career in Fort Myers; Sean Osceola will depart for California to play summer baseball; and Trevor Thomas will return to the football field.

If Okeechobee High School baseball coach Eric Kindell had his way, he’d keep the trio from Brighton Reservation around as long as he could. This winter and spring Kindell coached Layton and Sean on varsity and brought up Trevor from the junior varsity squad late in the season.

As his team warmed-up before its final regular season game April 17 against Lincoln Park, Kindell delivered glowing remarks about the Tribe’s representatives on his team, starting with Layton, a captain and four-year varsity outfielder who added pitching duties to his repertoire this season.

“Layton has done a good job,” Kindell said. “He’s hitting [.326 as of April 17], which is good. He’s played a good right field for us. I enjoy having him around. He’s a good guy to have on the team, and he’s a good teammate to others.”

“He’s a very intelligent young man,” Kindell said. “It’s nice to watch kids grow up. He does great in school. He’s a 4.0 student. His mom and dad should be really proud.”

A proud moment for Layton came as a junior in the 2014 Class 6A-District 13 championship game when he helped Okeechobee win its first district title in five years. Layton said going 2-for-2 with two RBIs in the game is one of his fondest memories, along with hitting his only home run when he was a sophomore.

Layton, the team’s starting right fielder, decided this season that he wanted to give pitching a shot. The southpaw saw limited action on the mound with just seven innings in the regular season. Although he struggled to find the strike zone in the regular season finale as a starter, overall his first season as a pitcher received decent reviews.

“He pitched against Westwood [in the regular season] and he did pretty good,” Sean said. “He threw a lot of first-pitch strikes and got ahead of batters.”

A college career awaits Layton, whose new baseball home will be the former spring training stadium of the Boston Red Sox. In January, Layton signed to play for Florida SouthWestern State College in Fort Myers. The team’s home venue is City of Palms Park, which seats more than 7,000. Formerly known as Edison State College, the school will field a baseball team starting in the 2015-16 season for the first time since the 1990s. Layton is eager to be part of the rebirth.

Layton and Sean grew up as neighbors on Brighton Reservation. Because Layton is a few years older than Sean, they rarely played organized baseball together. A few games for the Brighton Warriors when they were youngsters were the extent of their experience as teammates, until this winter when Sean joined Okeechobee as a freshman.

Sean, who has accumulated years of nationwide travel baseball experience, is no ordinary freshman.

“He’s definitely seasoned,” Kindell said. “He’s seen some good pitching and faced good batters when he’s pitched. I actually don’t call him a freshman, even though he is on paper. To me, I think of him a lot more than that. His baseball IQ is probably the highest on the team. As a freshman, that’s saying a lot. You can tell he’s been around people who have played a lot of baseball.”

“I’m pretty happy with all my performances. I’ve limited runs. I’ve given up only one home run all season, which is pretty good as a freshman,” said Sean, who will rejoin the California-based Phenoms travel team at the end of the school year. “We practice every day, and we go to a lot of tournaments where colleges look at us.”

When he wasn’t used as a pitcher, Sean played first base or third base. Regardless of where he plays, he’s already made a significant impression on his coach.

“He’s an outstanding kid,” Kindell said. “You couldn’t ask for a more polite kid. When my kids grow up, I’d like for them to be like him. He does a lot of things right. He’s a great kid to have around.”

Kindell echoed those sentiments when asked about Trevor’s promotion to varsity from junior varsity.

“He’s a pretty cool kid. He plays two sports at the school; there’s not many kids that do that anymore,” Kindell said. “He works hard every day. He’s pretty witty. I brought him up to have him around. I think he’s a good aura for the team.”

Trevor spent his sophomore season this year improving his pitching and batting. He started the season in the lower third of the batting order but worked his way up to the 3 and 4 spots. He boosted his batting average more than 100 points compared to his freshman year and delivered three complete games on the mound.

“Much better year,” said Trevor, who batted .285 and also played shortstop, third base and left field.

Trevor made the most out of the few games he played on varsity late in the season, including notching two hits in four at-bats. 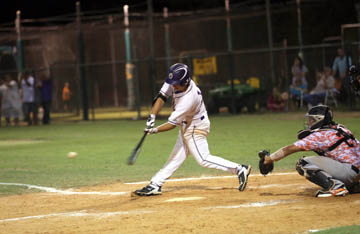 When baseball season finished, Trevor planned to shift his focus to spring football. He was a quarterback and free safety on the JV team last season until a broken finger sidelined him.

As for baseball, Okeechobee will lose its three starting outfielders – including Layton – to graduation. The voids will need to be filled next season.

“Our outfield is completely seniors, so I’d like to think that one of those spots could be mine,” Trevor said.

“He’s definitely here learning and we really like him,” said Kindell, whose team finished with an 11-13 record after being eliminated April 22 by top-seeded Jensen Beach, 4-2, in a 6A-13 semifinal.