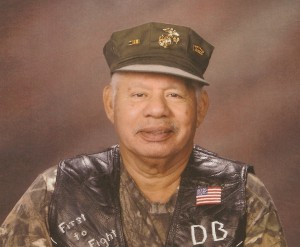 BRIGHTON — Celebrating his birthday on Oct. 22 with a host of family and friends, Dan Bowers reflected on a lifetime of memories that spanned 70 years and carried him halfway around the world.

A member of the panther clan, Dan Bowers was born on Oct. 24, 1941, in a camp near the site of the old Boehmer School House in Brighton. He is the eldest son of Dick Bowers and Marian Cypress Bowers. His grandfather, Wilson Cypress, was well known for his hunting skills from north of Lake Okeechobee through the heart of the Everglades to Smallwood’s Store on Chokoloskee Island on the lower Gulf coast.

During his early years, the Bowers moved their young family to Dania in search of work and Dan began his education. “Dan and I attended Miss Wilson’s first grade class together,” said Florida historical, legendary and wildlife artist Guy LaBree. “He is one of my oldest Seminole friends, and I cherish the days we played together in the woods and shared our experiences.”

“Dan returned to Brighton and we became classmates from the fourth grade all the way through high school in Okeechobee,” said Alta Lee Thomas-Barber. “There aren’t very many of us left from the old days, and I feel really privileged to share in celebrating this important occasion with Dan. Growing up, he lived life to the fullest between school work, his love of football and work at the U-Save, but he still found time for his friends.”

Following graduation from Okeechobee High School, Bowers enrolled in technical school in Lawrence, Kan., to learn masonry skills. From there he enlisted in the United States Marine Corps on Oct. 4, 1964, in Kansas City, Mo., and went off to boot camp in San Diego, Calif.

“I always knew that I was going into the military,” Bowers said. “In the 1950s I saw Roy Nash Osceola and Herbert Cypress when they were home on leave in their full dress uniforms. As a boy, they were my heroes and inspiration and I wanted to be just like them.”

“You don’t know what you are made of until you become a Marine,” Bowers said. “They give you intensive training physically and mentally and then instill in you the enthusiasm and desire to realize your potential. The Marines helped me to discover who I am and shaped the man that I would become. They train you, train you some more and then retrain you until they make you the best that you can be.”

Sgt. Dan Bowers, Communication M.O.S. 2511 and 2531 Wireman and Radio Specialist, arrived in Vietnam in 1966 for his first 18-month tour of combat duty. His service took him to Chu-Lai, Da-nang and several military offensives before returning him home for a 20-day leave. The Marines then sent him back for a second tour in Vietnam that terminated with the completion of his four-year enlistment on Oct. 5, 1968. He has received honors for the Vietnamese Campaign, National Defense Service, Vietnamese Service and Good Counsel Medals.

It has been 41 years since Dan and Agnes Osceola Bowers were married in 1970. They have three children, Elrod, Rosetta and Danette. Their descendants continue to grow with several grandchildren.

Following his military career, Bowers put his masonry and construction skills to work by joining the Housing and Urban Development (HUD) and Development Corps of America (DCA) programs building houses in Brighton and then Hollywood, Sunrise and Miramar. During the 1980s he became director of the Seminole Construction Department and managed numerous major projects which included the Swamp Water Cafe, gift shop, restrooms and living quarters at the Billie Swamp Safari.

Since his retirement, Bowers has been an active member of the Seminole Veterans and participated in their Color Guard presentations for many years. “Our ancestors were warriors and fought to protect their homes and freedom,” Bowers said. “There is great truth in the saying that ‘freedom isn’t free.’ I thank God every day for sparing my life so that I could come home. It has been my privilege to become a Marine and fight to protect our freedom, and I encourage our next generation to strive to meet the challenge. There is no finer duty than to serve your fellowman.”