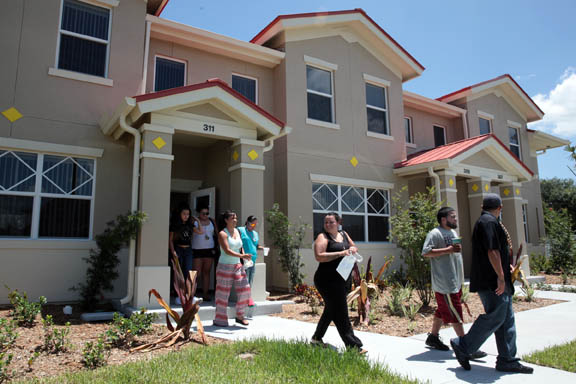 IMMOKALEE — Eight families returned home to the Immokalee Reservation June 26 after the completion and grand opening of new, long-awaited townhomes.

Raul Escobar, who has lived nearby off the reservation with his family for 16 years, signed his lease during the grand opening event and moved in the same afternoon with his wife and children.

“I’ve been waiting a long time to live here,” the 34-year-old Tribal member said. “I had to wait until I had white hairs to live here. I’m happy to be on the reservation; it means a lot to us to come back. There is a lot to do here. It will have a big impact on my family.”

Adam Nelson, director of the Tribal Community Development Department, said that after they secured the funding, departments worked together to complete the project. Construction began in June 2014, but Councilman Osceola said the idea hatched eight years ago.

“These townhouses were in the pipeline for a long time,” Rep. Frank said. “I’m glad the Board and Council worked together to get them off the paper and in the ground completed. Immokalee is in need of more housing, and we can help alleviate the problem here.”

About 200 people call Immokalee home, but the reservation is growing. Next, the Tribe will tackle the development of seven single-family homes on Alice Jimmie Circle. Infrastructure is underway and construction should commence by November.

“This is a proud moment for this side of the reservation,” Liaison Scheffler said. “We lived in chickees here; it’s nice to see people move back to the reservation after being off for so long.”