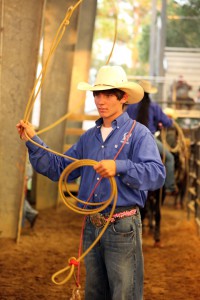 BRIGHTON — To say the Johns family likes the rodeo is like saying the Ford family likes cars. The latest rodeo enthusiast in the family, 13-year-old Jobe Johns, is galloping to the top of the field.

Jobe recently competed against his peers and adults in the Josiah Johns Memorial Rodeo held at the Fred Smith Arena in Brighton. During the junior rodeo on Aug. 17, he won five events, and although he didn’t fare as well during the adult rodeo on Aug. 18, he managed to hold his own.

“He’s bad to the bone and is doing a good job against these men,” said Tara Johns, Jobe’s mother. “But he’s still only 13, so I have to help him get ready.”

Jobe began rodeo riding at 4 years old, and he would like to make a career in the rodeo. He already has sponsors, including Cinch National Rodeo Team and Phoenix LLC.

“I love the adrenaline and winning,” said Jobe, a ninth-grader in Troy, Ala. “Competing against grown men doesn’t bother me at all.”

“I practice every day at home,” Jobe said. “I love being here; there is nothing about the rodeo I don’t like.”

A well-rounded kid, Jobe also enjoys hunting for deer and turkey and socializing with his peers. Billy Joe Johns, originally from Brighton, is proud of his son’s accomplishments.

“He’s been working pretty hard to get to this point,” said Billy Joe, a former rodeo cowboy. “He could have a career if he wants one.”
The Johns’ Alabama ranch contains a ring, and rodeo cowboys often bring Jobe good horses to ride for training. Joe Beaver, an eight-time world champion and family friend, works with Jobe during his visits.

As a member of the extended Johns family, rodeo runs in Jobe’s blood. The Josiah Johns Memorial Rodeo, an annual event held for more than 10 years, is named for the all-round cowboy and cattleman who had a successful rodeo career before passing away in an automobile accident in the early ‘80s. His son Marty Johns produces the rodeo through his company Marki Rodeo. His daughters, sister, aunts, uncles and cousins all compete in the rodeo as well.

“It’s a family affair,” said Marty, also the general manager at the Brighton Casino. “The memory of my father gives me all the power in the world.”

Marty likes the consistency of events at rodeos, but knowing everything can go wrong keeps him on his game. His company owns the animals in the rodeo, with the exception of the participants’ personal horses.

“We take care of our animals,” he said. “They eat before we do.”

Marty is also a partner with Paul Bowers Jr., and together they own the Five Star Rodeo Company, which produces Professional Rodeo Cowboys Association events.

In addition to Jobe, cowboys and cowgirls from all over the country competed in this year’s Josiah Johns Memorial Rodeo.

The bucking horses, steer, calves and nimble-footed horses with their cowboys and cowgirls put on quite a show at the arena. For those just starting a rodeo career or those well into it, Brighton is clearly the place to be with your boots on.