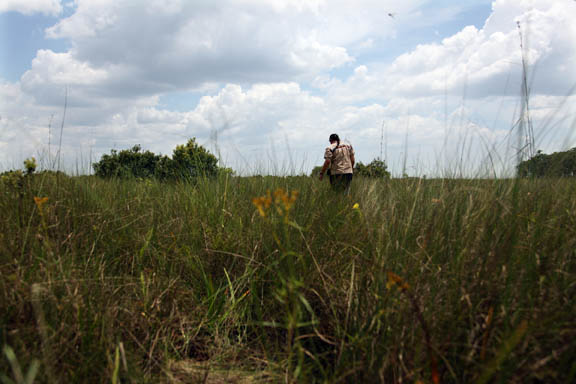 EVERGLADES NATIONAL PARK — Just past the asphalt that makes up U.S. 41 from Krome Avenue in Miami to San Marco Road in Collier County lies wetlands rich with flora, wildlife, prehistoric secrets and scores of Miccosukee and Seminole families.

Beneath the highway, also called Tamiami Trial, is buried history from centuries before the 76-mile stretch became road and before seven national and state parks, forests and animal refuges were designated to protect millions of acres of the surrounding ecosystem.

“The road was built on burial grounds. We know that,” said Miccosukee Tribe member Betty Osceola, who grew up in the wide open space called home to her ancestors and before that, the Calusa and Tequesta.

If a small group of bicycle enthusiasts from Naples gets its way, a second byway called the River of Grass Greenway (ROGG) will expand some of U.S. 41 by about 16 feet for a bicycle path. Other stretches will be built off the main road, sometimes up to a football field away, all connected by roads, boardwalks and bridges.

A $1 million grant from the U.S. Department of Transportation Transit in the Parks Program, won in 2009 by the National Park Service, has produced a feasibility study that outlines the plan proponents say could bring thousands of more visitors to the area to enjoy the scenery on bikes instead of vehicles.

Leading the charge is the Naples Pathways Coalition, which aims “to advocate for a full-integrated and safe pedestrian, bicycle and other non-motorized transportation network throughout the greater Naples area.”

Members Maureen Bonness, who is a botanist for Willow Run Quarry Preserve in Naples, and local historian Patty Huff, of Everglades City, came up with the idea in 2006 and spent the next few years promoting it to Collier and Miami-Dade county officials, federal agencies and local stakeholders.

Bonness and Huff now serve as co-directors of the ROGG Executive Committee.

Though the grant application made no mention of Native American interests that would be interrupted by the new road, the feasibility plan discloses “the Miccosukee and Seminole Tribes of Florida maintain a significant presence within the ROGG corridor.” The plan then describes how the disruption of the landscape could adversely affect archaeological resources, tribal land, historical landmarks and ceremonial ground.

Opponents say the plan was rife with problems from the beginning, such as referring to the project as a bike path.

According to the study, the public byway will require road infrastructure, about 28 bridges or boardwalks, turning lanes, parking lots, rest facilities, a transportation hub, electrical power and signage. Construction could cost $600,000 to $800,000 per mile – an estimated total of up to $60 million.

John Bob Carlos, an avid cyclist and Everglades photographer who has pedaled most of the 400 miles of bike paths and levee accesses that already exist along the corridor, said he originally thought the idea for another bike path would be nice, but he quickly changed his mind.

“They’ll cut through cypress and pave over orchids with parking lots. How can it be right if it ruins what you want to see,” Carlos said. “And who will use it? You can ride for a week and see only a few others on bikes. People who ride through the Everglades already know where to do it.”

In March, a parade of opponents, including Carlos, walked the 76-mile stretch from Miami to County Road 92 in Collier carrying signs and banners to get the word out.

The five-day walk was led by Osceola and Bobby C. Billie, a spiritual leader of the Council of the Original Miccosukee-Simanolee Nation Aboriginal People.

On July 1, they led a protest at Stephen P. Clark Government Center in downtown Miami. Although the roadway was conceived in Collier County and advocated by the Naples group, Miami-Dade County Parks, Recreation and Open Spaces Department took the lead with project manager Mark Heinicke at the helm.

Heinicke said the project is merely in the feasibility phase, a time when the proposed master plan is open for public comments. A Project Development and Environment (PD&E) study will come next, but who will take on the project is undetermined, Heinicke said. He predicts that Florida Department of Transportation will likely take charge of the PD&E because of the complexities of the plan.

“It all remains to be seen,” Heinicke said. “It’s definitely a long-term vision project. These projects don’t happen overnight.”

During the PD&E phase, reports will be required from experts to address conservation, history, culture, wildlife, traffic and other concerns.

“That’s when the real feasibility will happen. A lot of questions will be answered,” Heinicke said. “This is by no means a done deal.”

But Frank Denninger, a Gladesman and member of the Everglades Coordinating Council, thinks the project should stop now before it goes any further. He said the road will “urbanize” the entire stretch.

Both Osceola and Billie said the proposed road is an invasion of privacy.

The feasibility study and master plan states in the introduction: “The ROGG will provide an opportunity for millions of residents and visitors of South Florida to experience the Everglades landscape and culture …”

Billie, during an April interview with Miami New Times reporter Deirdre Funcheon, said, “I don’t need to be on display. I’m a person; I’m not an attraction. What, we’re in a zoo now?”

Stretches of road that would also allow strollers, wheelchairs and other non-motorized transport would be too close for comfort to homes, historic Native camps and ceremonial grounds, Osceola said.

“Some people who come already are very nice, but others, no matter what you say, will take advantage. You tell them that it’s not OK to take this or take that but they take it anyway,” Osceola said.

Along a stretch further east, plans put the path close enough for visitors to toss a stone through the back windows of six homes at Tigertail Camp.

Miccosukee Tribe Chairman Colley Billie, in a letter dated July 1 to Heinicke, went on the record with a litany of reasons for the Tribe’s opposition to ROGG: from dishonoring the Earth, to bringing unwelcome development to the doorsteps of Tribal members and sacred areas, to ignoring federal protection under the law.

ROGG stands to violate the Big Cypress National Preserve Addition Act, which protects the Miccosukee and Seminole Tribes “usual and customary use of these lands;” the preserve’s requirement to provide half-mile buffers around religious sites; and the Miccosukee Reserved Area Act of 1998, which gives the Tribe rights to live on and use land and water within the park.

“The Tribe is located in the heart of the Everglades, and our commitment to the Everglades and our way of life is unwavering,” Chairman Billie said. “Our top priority is to protect our homelands and our culture and customs.”

Osceola said plans are in the works for more demonstrations, perhaps in Tallahassee.