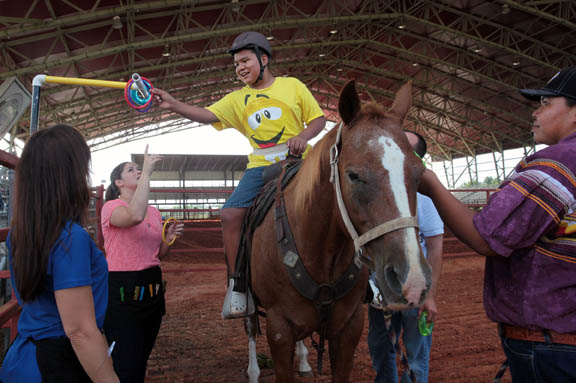 The youngsters can now shoot hoops during basketball clinics and straddle horses at the Junior Cypress Rodeo Arena all while receiving important therapy outside of a therapist’s office, said Lisa Izenwasser, CCDT program manager. Therapists lead activities that focus on social and physical skills.

“Therapy is always fun and we work the goal into the play,” Izenwasser said. “We work in a multidisciplinary fashion and look at each child’s plan of care.”

The equine therapy is based on standards of the American Hippotherapy Association. Participants ride a horse surrounded by a horse walker and therapists, while participating in activities that require communication and problem solving. The activities are tailored to individual needs.

“It is just another mode of treatment for the children,” said Allison Mason, therapy service coordinator. “It’s fun and exciting for them.”

Hippotherapy incorporates the horse’s movement, which provides motor and sensory input with physical, occupational and speech therapy. It is used for patients with a variety of special needs. Behavior analyst Christian Heinsler said equine therapy also teaches children to communicate to get what they want. For example, they have to tell the horse to walk or it won’t, he said.

Two gentle and patient horses, Boo and Hawk, were ready for the children at the arena July 7. Ko’Oshee Henry, 13, couldn’t wait to ride the horses that belong to his sister, Ayze Henry.

Ko’Oshee, who has autism, has a speech disorder called apraxia and has been in therapy since he was about 1 year old, said his mother, Brenda Tommie. He receives occupational, speech and cognitive therapy every week.

“Being around horses calms him down a lot,” Tommie said. “It also gives him more confidence in himself.”

Ko’Oshee sat tall in Boo’s saddle while physical therapist Preston Olson walked beside him. Activity stations included using a racket to hit a ball hanging from a post, identifying a pronoun and placing it in a sentence, popping soap bubbles and catching beanbags. Throughout the activities, Ko’Oshee followed directions, reached for items, sounded out letters and spoke in sentences.

“Equine therapy is such a language stimulator,” said speech therapist Lyndsie Fernandez. “Anything with animals takes kids out of their element and different senses are stimulated. Environmental changes are really good for kids.”

Olson has known Ko’Oshee for five years. They bonded when he taught Ko’Oshee how to ride a bicycle.

“That was a milestone for him,” said Olson, who has 14 years of experience as a physical therapist. “We developed a relationship; we clicked. Riding a bike allowed him to do activities with his family. It was a huge thing to accomplish.”

Although Olson hadn’t seen Ko’Oshee for about a year, the bond remains. Ko’Oshee was playful with him throughout the session.

Sam Two Shoes, 6, who had enough energy to fill the arena, rode Hawk during the equine therapy session. He chose the stations he wanted to complete but had to be coerced to participate in the beanbag toss by the therapists, who threw it to each other to redirect his attention to the game.

“This is all about him increasing his communication to get what he wants,” said Heinsler, who has worked with Sam for more than a year. “We’re teaching him skills so he can communicate more effectively. We are building communication skills. He’s shown tremendous progress at home and at school.”

Sam also participated in the basketball clinic July 8 at the Howard Tiger Recreation Center in Hollywood along with brothers Tyler, 6, Nile, 4, and Logan Osceola, 3. Language skills are an important component of the clinic. The children must ask for the ball to be passed to them during a passing drill, said their mother, Natoshia Osceola.

“Their communication skills are improving,” Osceola said. “They are also learning to be patient and wait their turn. I can see them using the skills; it’s carrying over into the home.”

Behavior therapist Corey Renken led a drill at the basket. The kids dribbled, passed, jumped and shot. When the boys followed directions, Renken hoisted them up to the rim to slam dunk the ball.

“They are getting structure and organization, following directions and having social interaction,” Renken said. “In the long term, a lot of these skills translate into all facets of life.”

The court was filled with kids and therapists running laps, completing drills and shooting at the basket.

“We like having a large group so they can model each other’s behavior and learn from each other, which is always a positive,” Izenwasser said.

Mabel Doctor brought her grandson Angelo Osceola Jr., 6, to the clinic. He’s an active child who loves to run and she hopes he can learn to enjoy sports.

“He can get along playing with other kids, but his speech holds him back,” Doctor said. “He’s in speech therapy. CCDT is a good place for kids to get therapy. They are helping him out.”

Equine therapy and basketball clinics will be offered during winter, spring and summer breaks from school.