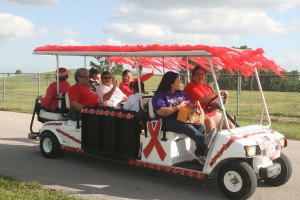 IMMOKALEE — National Red Ribbon Week unites people and communities by taking a visible stand against substance abuse. The Red Ribbon campaign and the tradition of displaying red ribbons as a symbol of intolerance of drug use began in 1985, after drug traffickers murdered a Drug Enforcement Administration agent in Mexico. Since then, the week has been commemorated in schools and communities nationwide.

With the Seminole Police Department and Color Guard in the lead, a parade of floats, swamp buggies, bicycles, golf carts, a horse-drawn carriage and cheering groups of marchers stretched for three quarters of a mile behind the Marching Indians Band playing On to Victory. Winding its way through the streets of the reservation, the parade drew a cheering crowd and eventually arrived at the Immokalee Community Center for a barbecue buffet catered by the Immokalee Seminole Casino.

The Casino and its employees have partnered with the Immokalee community for several years to help the Red Ribbon activities deliver their important message that can save lives and families. Various casino departments decorated doors with compelling themes on removable panels. On parade day, these panels were incorporated into a float and accompanied by a marching vanguard of employees.

“Drug addiction, alcohol and other devastating enemies wear many disguises in order to sneak up on you,” said former Chairman Mitchell Cypress. “These enemies are not prejudice and are anxious to attack everyone. We have all lost family and friends in this never-ending war. Don’t allow yourself to become a casualty.”

Community members, individual departments, service organizations and the First Seminole Baptist Church of Immokalee formulated a joint effort to make the 2012 Red Ribbon Week a success. Door decorating contests kicked off the event based on the theme, The best me is drug free.

Culture, Education and the Library departments stimulated creativity with the production of a pledge quilt. Meaningful patchwork squares were contributed by individuals and families followed by a pizza party. Comprised of 60 patches, the quilt will be on display at the gym to remind everyone of the pledge they took to be drug free.

Pastor Josh LeadingFox led a prayer walk on Spirit Night, ending with a special evening of inspiration and remembrance at the First Seminole Baptist Church of Immokalee. A traditional dinner was followed by a service of encouragement that included an emotional testimony by Edward Aguilar.

Sharing his feelings of self-doubt, addiction, near-fatal experience and miraculous recovery, Aguilar is an inspiration and emphasizes the strength that comes from family support and belief in the Creator.

The Family Extreme Challenge provided an extraordinary climax to a week of community support. The Recreation Department constructed an obstacle course that drew an enthusiastic crowd. What began as five family teams of competitors blossomed into 12 teams who struggled through balance beams, a soap slide, an ice-filled tub, a military mud crawl, a ladder elevation and mountain climb over hay rolls. It took a team effort of family members helping each other by carrying, pushing and pulling to ensure that everyone from the youngest to the oldest completed the course.

“I have never been so cold, so muddy, swallowed so much sand and had so much family fun,” said Immokalee Board Liaison Dorothy Scheffler. “Give yourself a big hand because each of you has made it happen. Families that play together stay together and support each other. Being a member of a family is a lifelong occupation and a big responsibility but one of the most rewarding things that you will ever experience.”

“No obstacle is too high when you are drug free,” said Family Services prevention specialist Fred Mullins. “Red Ribbon 2012 has been fantastic because of the contribution that each of you have made. Reach out and touch somebody and know that you are surrounded by love and understanding because ‘the best me is drug free.’ Each of you is important and can make a difference.”