Skip to content
You are here
Home > Community > Police Explorers see the sights in Washington, D.C. 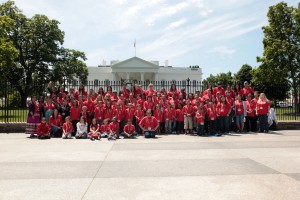 WASHINGTON, D.C. — Police Week wasn’t only about law enforcement for the Explorers; a healthy dose of sightseeing was included in the program. The group took trips to Arlington National Cemetery, the United States Holocaust Memorial Museum, the Pentagon, FBI Headquarters and the National Air and Space Museum.

First stop was Arlington National Cemetery, where the group witnessed the changing of the guard at the Tomb of the Unknowns. The elaborate ritual brought tears to many eyes.

The group also toured the United States Holocaust Memorial Museum; the youth had a separate tour from the adults, where they learned the story of the Holocaust through one boy named Daniel. In his diary, he told how his life and surroundings changed as a result of persecution. He ultimately wound up in a concentration camp where his mother and sister were killed. He survived the war and reunited with his father. Tribal kids were affected deeply by the exhibit.

“It was historic and it was harsh,” said Devon Osceola, 12.

Most of the kids couldn’t imagine it.

“The Jews were tortured and taken from their families,” said Trinity Williams, 12. “It’s sad.”

“They didn’t have anyone to go to,” added Jalee Wilcox, 7. “They had no one to take care of them because everyone tortured them. At least we can always go to the police.”

Cameron Osceola saw the bigger picture and parallels to the plight of Native Americans when the Europeans came.

“It showed things can change at any moment,” said Cameron, 16. “One day Daniel was a normal kid and the next day he was hated. It’s like when the settlers came; one day you could be living and the next day people came and stole your stuff and pushed you out.”

The group explored the Pentagon, beginning with a tour of the Pentagon Memorial, which honors the 184 people who were victims of the terrorist attack on the building Sept. 11, 2001. Inside, they perused books of photographs and biographies of the victims.

The Pentagon itself is the largest low-rise office building in the world and has 17.5 miles of hallways inside. Between 25,000 and 30,000 people work there every day, so the building resembles a small town with stores, restaurants and services available. People can get their teeth cleaned at the dentist, have their clothing cleaned at the dry cleaners, renew their driver’s license at the DMV, shop at Best Buy, buy diamonds at the jewelry store and eat any kind of fast food imaginable. The 5-acre center courtyard is the largest non-salute zone in the world, which gives soldiers and officers a chance to keep their hands at their sides while enjoying the outdoors.

Inside FBI Headquarters, Explorers toured the education center and saw historic artifacts, including the telephone that was bugged during the Watergate scandal, the flag that flew over the World Trade Center on Sept. 11 and a piece of the structure itself.

After the tour, the group had front-row seats to the shooting range where FBI agents must qualify to use their weapons four times a year. Former FBI Director J. Edgar Hoover wanted the agents to be the best shots in the world and he wanted the public to know it, so he built an auditorium for the public to watch agents shoot.

Chaperones took their groups to a variety of museums, including the popular International Spy Museum, during the last afternoon of the trip. Before boarding the plane to Florida, the group toured the National Air and Space Museum’s Steven F. Udvar-Hazy Center near Dulles International Airport, which houses the space shuttle Discovery and other large aircraft.

After an exhilarating but exhausting week, all aboard were glad to head home.