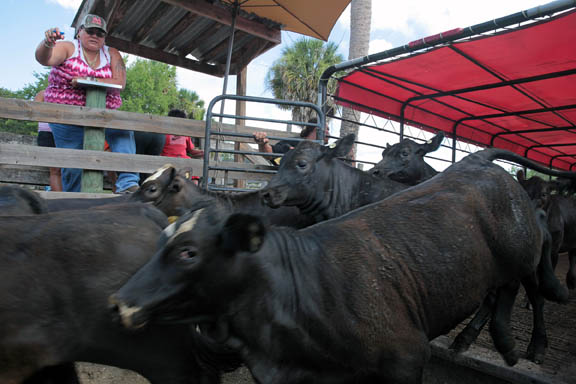 Another record-breaking calf sale made for busy days during the annual calf shipment July 6-17 in Brighton and Big Cypress, where nearly 3,000 calves were rounded up for transport to feedlots across the country, Seminole 4-H’ers and the Tribe.

The two reservations exceeded more than $5 million in calf sales and weaned some of the heaviest calves the Tribe has ever grown, said Alex Johns, Natural Resource director and second vice president of the Florida Cattlemen’s Association.

The cattle industry has long played an important part of Seminole heritage and identity, and today the Tribe is one of the top ranchers in the country. To keep the tradition alive, the 4-H program encourages youth to raise livestock to send to market.

When Aiyanna Tommie first met the 550-pound steer she will raise for the next eight months, they didn’t immediately hit it off. The agitated steer ran in and out of the cattle trailer before Aiyanna finally corralled him inside for transport to the pasture.

“I did eight years of showing hogs,” said Aiyanna, 15, of Brighton. “This is something new. I wanted the experience of getting dragged around the pen.”

Like all 4-H youth raising cattle, Aiyanna will feed, water and walk the animal daily in preparation for the show ring. By the time of the Seminole 4-H Show and Sale in March, he will weigh more than 1,000 pounds.

“I’ve been giving [4-H’ers] calves for 35 or 40 years,” said Norman Johns, who made sure his children completed a 4-H steer project. “It’s an education for them. They have to get up early and feed them; it’s a lot of work. Some of them will go into the cattle business, but not all.”

Hunter Strickland bought a steer and heifer from Lola Gopher’s herd in Brighton. This will be Hunter’s fourth time in the three-year heifer program. Participants in the heifer program don’t sell their cows; they breed them to build a herd of their own. The steer, when sold at the end of the project, should cover the heifer project costs.

“I love it, but it’s a lot of work,” said Hunter, 15. “The first thing to do is break them. I’ll put them in halters and tie them up for a few days to calm them down. Then you just work them until show time.”

“It builds future leaders,” he said. “Those kids will go on to leadership positions and politics in the Tribe.”

The marsh pens in Brighton, which have been used since the 1930s, buzzed with activity July 10 as employees wrangled 9-month-old steer and heifers for shipment.

Once unloaded from the trailer, the animals were weighed and sorted into pens of 70 to 100 steer that would each fill a truck.

By the end of the day, five multilevel truckloads were filled with cattle on their way to Colorado, Illinois, Kansas, Nebraska, Tennessee and Texas. One truckload stayed in the neighborhood; it went to Okeechobee.

The Tribe purchased 400 calves, which were sent to the Brighton feedlot for its Seminole Pride Fresh From Florida program. While there, they will gain about 2 pounds per day. When they reach 750 pounds, they will be sent to a finishing facility, slaughterhouse and then to the Tribe’s distributor, Cheney Brothers.

The Tribe’s cattle all have data-filled computer chips in their ear tags to help organize and track them. Owner name, weight, heifer breeding information and birthdate are on the chips. Not all ranchers equip their herds with chips, but the Tribe has used them for about a decade, said Norman “Skeeter” Bowers.

“With a chip, you can trace an animal from birth to burger,” he said. “If every rancher in the country had a chip, it would make things easier for inspectors, but they aren’t mandatory.”

“Cattle gain weight when it’s dry because there is more protein and nutrients in the grass,” Stanlo Johns said. “When it’s wet, that’s diluted. The cattle are about 50 pounds more this year compared to last year.”

According to the Cattlemen’s Beef Board and National Cattlemen’s Beef Association, more than 97 percent of U.S. cattle ranches are family owned. Diane Smith’s family is involved with her herd, but her daughter Amanda and son-in-law John Julian are the primary ranchers.

“Those whose families are in cattle tend to come back,” Smith said. “My husband, Roger, taught everyone in the family how the cattle thrive. Last year we got the 10-year cattle producer award from the Tribe.”

The latest U.S. Department of Agriculture’s Census of Agriculture shows the average age of U.S. farmers is 58.3 years. The census also states the rate of new farmers entering agriculture is slower than those who retire, which worries Alex Johns.

“We have to keep our kids engaged,” he said. “It’s hard with all the revenue we receive to keep them involved in the hard work. 4-H kids know how much work it takes and that it’s part of our heritage. It’s in their blood.”

He believes even city kids can gain interest in ranching when they see their friends and “country cousins” get involved. Hollywood 4-H members Dyami Nelson, Cisco Rodriguez and Daniel Rodriguez are all committed to the steer project. The animals are adjusting to their home in cow pens on the Hollywood Reservation.

Last year Cisco, 15, raised a hog but likes the challenge of a larger animal. On a recent Saturday morning, he stayed busy watering and feeding his steer.

The biggest thing the youth need to learn, said Alex Johns, is that the biggest steer is not the best for learning.

“They want one that’s docile,” he said. “They should get a smaller one they can manage. It’s not all about having the best steer; it’s about the experience and learning the skills to handle cattle.”