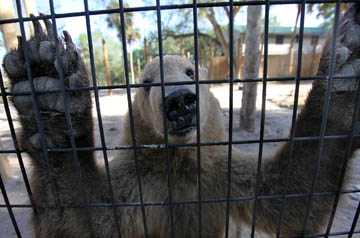 BIG CYPRESS — If the two bears residing at Billie Swamp Safari could speak, they might say they are the happiest bears in town.

At least that’s the human interpretation of their collectively loud, motorboat-like grumblings when greeted “good morning” on a Tuesday in mid-April. Like cats that purr when pleased, Noogie, a 300-pound northern grizzly, and Little Girl, a 100-pound native black bear, reverberated pleasantries from their gut to Billie Swamp secretary Debi Lee.

“It’s a sound of contentment and comfort,” said Lee while the too-large-to-cuddle but just as cute bears suckled their paws and waited for handler Jodi Reynolds to serve 10 pounds of breakfast berries, mangoes, grapes, greens, peaches, yogurt and Honeycomb cereal on a gold-colored platter.

They are the king and queen of the attraction’s nearly completed 5,000-square-foot bear habitat. With a freshwater pond, cozy rock cave, plenty of yard to lumber about and soon-to-be-built jungle gym, Noogie and Little Girl are home sweet home.

Both bears are rescued animals, Lee said. They were taken in separate scenarios from urban home owners who likely thought it would be fun to keep bear cubs. It did not take long before the owners learned that bears are not physically cuddly for long.

“They can cause great danger,” Lee said. “Yes, they are cute. But if they play with us the way they play with each other, we would be hurt, seriously hurt.”

No one knows that better at the Big Cypress attraction than Reynolds. Although she has never suffered more than a minor clawing, if Reynolds was not a 29-year veteran animal trainer, interacting with Noogie could have been deadly.

“We don’t teach the animals to do tricks – it’s about interaction, creating bonds and learning limits. These are never just animals in a cage,” Reynolds told The Seminole Tribune in an earlier interview.

Noogie came to Billie Swamp when he was a bottle-fed cub. He is now just past his first birthday and towers about 6 feet tall. Little Girl arrived about four months later. She is now about 11 months old and stands a tad shy of 5 feet.

Putting the bears into the wild is not an option, Lee said, because they were “humanized” during their first months and would not survive if left on their own.

Wovoka Tommie, acting director of operations at Billie Swamp, said the habitat construction will be completed in coming months. Workers are also plugging away at finishing a new water-based habitat for otter triplets River, Kora and Daisy. Possibly by next season, the 2,200-acre preserve will also feature new habitats for resident baby bobcats Skye and Jezebel and two raccoon pets. Between jaunting tourists through swamp buggy and airboat tours and performing alligator and wildlife shows, staff members are building the habitats themselves.

A bird of prey house was recently completed and is awaiting rescue birds.

“We’ll never be able to recreate a totally natural habitat for the rescue animals, but we try and at the same time give people a chance to witness up close the animals that live here,” Tommie said. “We want to provide an interactive experience without putting our human guests in danger.”