Skip to content
You are here
Home > Education > Honored by FAU, Louise Gopher shares love of education at commencement 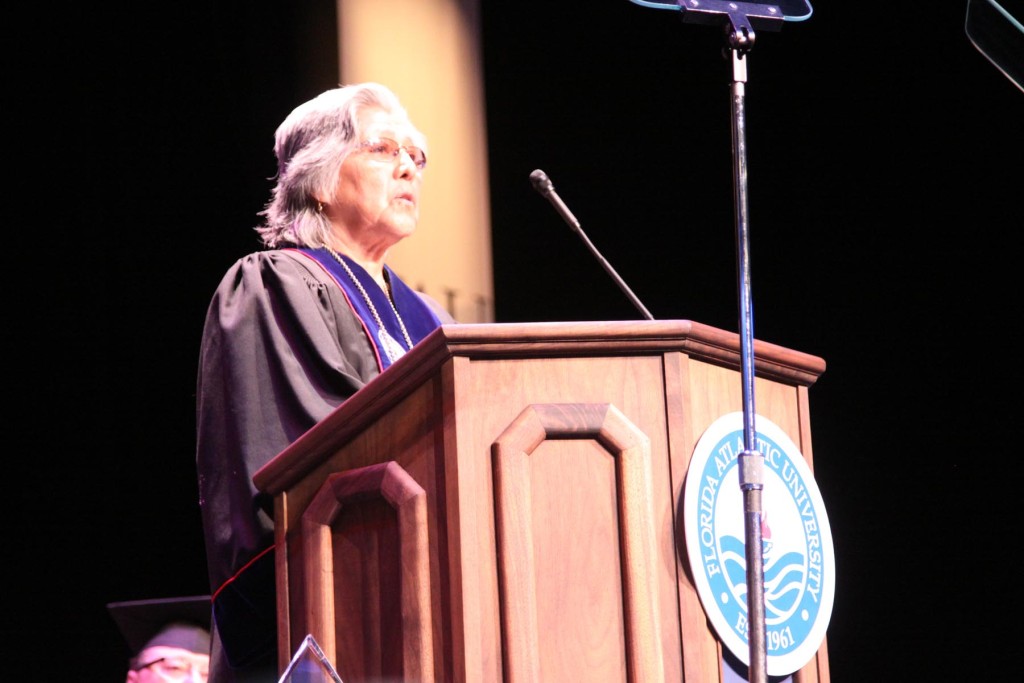 BOCA RATON — If the hundreds of new graduates from Florida Atlantic University’s College of Business wanted to see a fellow alum making the most of her education, they only needed to look straight ahead during their commencement ceremony May 1 at the Carole and Barry Kaye Performing Arts Auditorium.

The award recognizes individuals for service of great value to FAU or the larger community.

On a stage filled with school dignitaries and officials, Kelly draped the medallion around the neck of Gopher, whose bachelor’s degree earned 40 years ago made her one of the first Seminole Tribe members to graduate college.

“At the time I graduated, Billy Cypress – the late Billy Cypress from the (Ah-Tah-Thi-Ki) Museum – he was the first, I believe, to graduate with a four-year degree. Then I was probably the second, and the first woman. Then I think Max Osceola and other people (graduated),” Gopher said.

Gopher, the Education Department  director for the Seminoles, emphasized the importance of learning, including educating youngsters about the value of the Tribe’s culture, customs and language. She helped create Pemayetv Emahakv Charter School, which opened in 2007 and now boasts more than 200 students from kindergarten through eighth grade on the Brighton Reservation.

“Florida Atlantic University is proud to claim her as a graduate and applauds her dedication to her important mission,” Kelly said.

In her address to the graduates and their families and friends, Gopher, who retired seven years ago, brought the audience along on a journey through her remarkable past as she explained how her “love affair with education” blossomed.

The roots of being a pioneer in education within the Tribe started at an early age for Gopher, who was just 6 and didn’t speak English when she and her siblings were enrolled in a public school by their father, a move that wasn’t customary among Tribal families at the time.

“The school officials had no idea what to do with us,” Gopher told the audience. “This was during the days of racial segregation, and they couldn’t figure out if we were white or black. Eventually, they assigned us to a white school, the Fairlawn Elementary School, west of Fort Pierce.”

Raised in a chickee, Gopher had to adapt to a different environment at school, which included indoor bathrooms.

“The bathroom conveniences mystified me. We had no indoor facilities or running water in our home,” she said.

She learned English at Fairlawn and became fascinated with books, absorbing the pages that helped open her life’s future chapters.

“I loved opening books, looking at the pictures that were inside them and eventually learning to read what was printed on their pages,” she said. “I remember going home after school and playing school with my mother, teaching her new words that I learned that day. I loved acquiring new skills, like the ability to do arithmetic, and I especially loved the library because it was there that you could read fascinating stories and get information on anything you were curious about.”

After graduating from Dan McCarty High School, Gopher tested unchartered waters for female Tribal members by becoming a college student. She earned an associate degree from what is now Indian River State College and then spent two and a half active years at FAU, where she was a member of Phi Gamma Nu business sorority, served on a governing board for student organizations and received a bachelor’s degree in business.

“When I enrolled at FAU in the late 1960s, it was a revolutionary thing for a Seminole Indian to go to college,” Gopher said. “It was even more revolutionary for a woman to become a trailblazer. But I had loved the world of education for as long as I could remember, dating back to my days as an elementary school student in the St. Lucie County public school system.”

After working for state agencies, Gopher’s ultimate career goals remained based in education within the Tribe.

“The answer was that I needed to stay in the world of education to bring that great gift to the members of my Tribe, especially young people,” she said.

In addition to helping educate youngsters during her tenure as Education director, Gopher is also credited with boosting participation tribalwide in the Education Department’s programs and increasing the number of Tribe members who pursued college education.

In March, Gopher was inducted into the Florida Women’s Hall of Fame. She explained to the graduates that her degrees and recent honors were possible because her father recognized the importance of education.

“…I want to thank my dad, Willie Jones, for the value he placed on education and for instilling that value in me and his other children. Like all parents, he wanted us to have a better life,” she said.

Gopher urged graduates to treasure their heritage, learn as much about it and share the knowledge with their children.

“We move most confidently into the future when we are grounded in the lessons of the past,” she said.