Skip to content
You are here
Home > Education > Kids cook up food, fun at Culture Camp 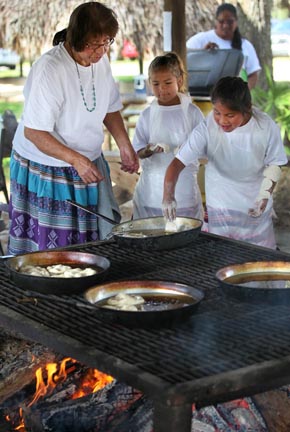 BRIGHTON — There’s an art to learning culture at Pemayetv Emahakv Charter School and for the youngest students, the art of culture is delivered in baby steps.

“Tapeksicet. Tapeksicet,” said Seminole history teacher Jade Braswell Osceola as a half-dozen first-grade girls flipped, flopped and punched flour and water into dough – and all over their hands, faces and clothes. “For good frybread, you have to get mad with it.”

Nearby, at the chickee village on Fred Smith Rodeo Arena grounds, first-grade boys put butter knives to work on soft bars of green soap to carve palm-size alligators, fish and canoes under the watchful eyes of adult men. Sometimes, when all was done, piles of discarded soap chips were larger than the sculptures.

“When they get older and better, and not until then, they will get to use real knives and cypress wood,” culture consultant Joe Osceola Jr. said.

Children in kindergarten through eighth grade spent half or entire school days from April 30 to May 2 at PECS’ annual Culture Camp Days. As a bonus to the school’s intensive cultural curriculum, the camp allowed students to turn classroom lessons into practical applications. For the tiniest kids, that meant hours of outdoor fun using their Creek ancestral language to play akopunkv (games) that paid off in cvmpoce (candy).

Creek nouns like lucv (turtle) and fuswv (bird) drawn on cardboard were “fished” from behind a lake-blue tarp. Other paper illustrations of creatures and things burst from balloons during balloon-popping races. A life-size, hand-painted board game required little ones to count numbers and name colors in Creek.

“Every activity builds on speaking more words and then full sentences,” Gopher said. “Then, we encourage them to go home and teach their parents so our language does not die off.”

Kindergarten student Ben Purvis said he most liked the camp’s story time with storyteller Billy Walker, who invoked legends of the past.

“The best part I learned was birds were flying on the Earth even before the whole world was made,” he said. “And I liked eating frybread.”

Kids up to third grade kneaded dough into frybread, carefully placed the dough into pots filled with oil and then washed utensils at the communal water faucet. Adults manned the cooking fire and removed the bread from the oil.

The fruit of their labor was served during lunch – topped in jelly or honey.

Fourth- and fifth-graders learned how to make more complicated recipes like spam and tomatoes. On the last day, the oldest girls grinded corn and boiled sofkee, while the boys slayed a hog. Later, boys and girls cut the hog and cooked it in a vat of hot oil.

“In the old days, this is where the lessons were taught – in the outdoors and together with young, old and everyone in between. Even today, we can turn to the elders and get a taste of what it was in the day,” Braswell Osceola said, pointing to more than a dozen parents and grandparents who volunteered for the day.

At the center of culture camp was senior Jenny Shore who has been on the front line of the PECS culture program since before the school opened in August 2007. Shore had been helping teach Seminole culture during Friday “pull-out” classes on the reservation. Then, Tribal students were plucked from public schools for all-day emersion classes.

Shore said PECS’ non-fluent Tribal staff and non-Native teachers not only learn to how to teach Seminole culture, they also pick up Creek.

“They may never be fluent, but they develop the teaching material so they also learn the language. They learn it along the way,” Shore said.

“The young ones play, play, play and have fun while learning.  By the time students get to seventh and eighth grade, it’s work, work, work for them while we stand back and guide them,” she said.

For Chaka Smith, of kindergarten, camp is spelled F-U-N.

“It’s fun and great. We get to be with our friends, do activities learn stuff – and eat frybread,” she said.