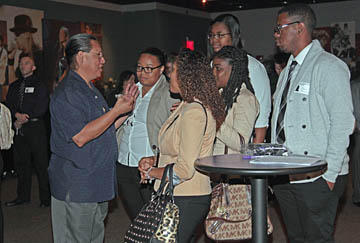 “I want them to get a well-rounded education,” said Conley, a member of the Arawak Tribe and former police officer. “I teach a lot of things that aren’t in the books. It’s important for me to bring my experience into the classroom.”

Tribal member Jim Osceola, a JWU culinary alumnus and member of the Seminole Gaming Tribal Career Development Program, led the tour that included a visit to the back-of-the-house training room.

“We are a casino,” he said. “We have a hotel, but we are a casino. The hotel is full year-round because of the casino.”

The job is 95 percent customer service, added security investigator Greg Leonatti, who works at each Seminole casino in Florida.

Technology and equipment are continually updated in the Security Department, and staff training is ongoing. Leonatti, who worked security in Las Vegas for 25 years, told students to put their heads on “a 360-degree swivel” to pay attention to their surroundings.

Seminole Police Department then conducted an interactive video training session for casino security officers as JWU students observed. The security officers, who stood before a 10-by-20-foot screen as various scenarios unfolded, responded to the video. Their responses affected the outcome of each situation.

Nicole Cary, a JWU senior, had the opportunity to participate in the training session with two Coconut Creek Casino security guards. The video showed a man who behaved in an incoherent, yet threatening, manner. The security officers did their best to keep him talking instead of acting out physically. Cary jumped in and told him to “show yourself.”

“It was an adrenaline rush,” said Cary, of Maryland, who wants to be a crime scene investigator. “I didn’t know what was going on, but I was ready.”

Students also had a chance to meet employees behind the scenes. Edwin Claudio, executive steward, told students to make sure they enjoy what they do.

The students had a rare opportunity to watch as a security officer observed two walls filled with video monitors showing live action from the cameras on property. They were quick with questions.

“I didn’t know we would be behind the scenes,” said Shawna Sowell, a sophomore from Virginia. “It gave us a very good perspective. The training scenes were very realistic; I never saw such realistic technology.”

The students had previously visited police departments but not a private security operation before the trip to Hard Rock. On the casino floor, they received another perspective from a senior member of the Seminole Gaming team.

“Our job is to create the wow, to pull the rabbit out of the hat, to give guests the best experience,” said Henry Pisano, vice president of player development. “It takes all of us to do that, that’s our business.”