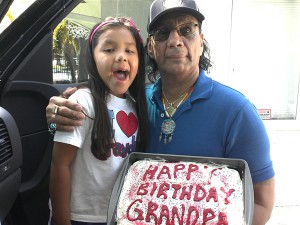 HOLLYWOOD — Patrick Doctor Sr., a member of Big Town Clan, celebrated his 54th birthday on March 17, which also happened to be St. Patrick’s Day. He was surprised by his wife, Anna, with a party at the Hollywood Softball Field that included a live band, a mechanical bull, a bounce house and pony rides.

“Money is nothing,” he said. “It’s the heart that counts.”

Almost three years ago, Doctor was hospitalized for being hit in the head with a lead pipe. He stayed in a coma for a month and a half before waking up in a hospital bed, not knowing the extent of his stay or his injuries. After relearning how to walk and talk, he went to a treatment facility for alcohol abuse. All the while, doctors were looking for a nursing home to put him in, thinking he wouldn’t live a normal life.

“The doctors said I was going to be a vegetable, but I came back,” he said. “The Great Spirit helped me out.”

His mother gave him a pendant with the words “Miracles Happen.” Proving that they do, Doctor spends his time lifting weights, working at Seminole Okalee Indian Village, helping his wife around the house and doing as much as he can for his mother.

“I take care of mom ‘cause she took care of me,” he said.

With two years and five months of sobriety, Doctor said he likes being alive today and enjoys living life sober. He spends his spare time going to the movies and concerts. He’s also taken trips to Jamaica, Mexico and Las Vegas, as well as a trip on a cruise ship that supports substance-abuse recovery, attending meetings all the while.

Family has been a big part of Doctor’s road to recovery.

“When I see my granddaughter it makes me stronger,” he said. “My wife is my heart, eyes and ears, ‘cause I got one bad eye and one bad ear.”

Plans for next year’s birthday are big, said Doctor’s wife, who said he is a miracle.