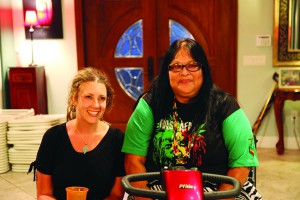 HOLLYWOOD — To celebrate the life of reggae legend Bob Marley, Tribal member Doris Osceola hosted a documentary screening of “Bob Marley: The Making of a Legend” on April 5.

The film shows footage of Marley before he made it in the music industry. Esther Anderson, a Jamaican actress and friend of Osceola, compiled the film from videos she shot while traveling with Marley in the early ‘70s.

“It’s made from footage I shot 37 years ago and lost,” Anderson said. “We fashioned a film from what we got back.”

With a large group of Tribal members interested in the life and music of Marley, Osceola decided to bring the fans together at her home. She set up dozens of chairs around her big-screen TV and brought in cooks to make authentic Jamaican food. Reggae music blared in the background prior to the screening.

“Everyone is getting together [for the film], so it’s a good thing,” said Osceola, who added that she has been a fan of Marley for 40 years. “If you’re a Bob Marley fan, then it’s for you.”

“Bob Marley: The Making of a Legend” shows Anderson and Marley traveling to the Caribbean Islands and to Kingston. It also shows footage of the Wailers’ first rehearsal.

“This film is an amazing film because it shows footage before Bob was anybody,” said Sheena Spirit, a singer who worked with Marley and lived in Jamaica for more than 25 years. “The purpose of this event is to come together from every Tribe and every nation to celebrate Bob Marley and the ‘one love’ spirit.”

In addition to the documentary screening, Osceola has found other ways to keep the reggae influence alive. In October 2011, she helped establish a permanent exhibit for reggae legend Dennis Brown with co-organizer Debbie Allen at the Hollywood Hard Rock Hotel & Casino. The exhibit features authentic clothing and a signed picture of Brown in his honor.

Also, back in February, Osceola shared a bit of Seminole culture with Jamaica when she traveled to the country and delivered a hand-crafted Seminole doll and a copy of Seminole Media Productions’ DVD of the Dennis Brown exhibit unveiling to Ionie Wright, executive secretary to the new Prime Minister of Jamaica, Portia Simpson Miller.

“Bob Marley is alive and well on the reservation,” she said.