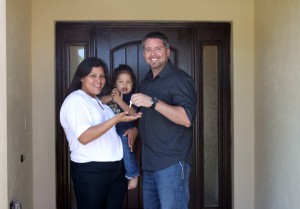 HOLLYWOOD — The Housing Department completed the first house in a new residential development last month on the Hollywood Reservation. It’s the first new development on the reservation since the Seminole Wind Courtyards was built in 1999.

The new development is located on Osceola Circle East, and the first house belongs to Tribal member Sunshine Frank.

“For me, it wasn’t a new house on a new lot,” Frank said. “It was a home. My two sisters had a house, and I wanted that for myself. I wanted roots.”

Frank worked closely with the Housing Department to start the homeownership process. The department helped her organize her finances to secure her loan and introduced her to her project manager, Shane Ruiz, to start designing her home.

Frank said that Ruiz was integral throughout the design phase.

“I wanted something comfortable for me and my son,” Frank said. “Shane helped me realize I should focus on what I needed and not what I wanted.”

The result was a home she would not only feel comfortable living in but also one she could afford. She used predesigned models for her home and tweaked them to fit her own preferences.

“It was a pleasure working with Sunshine,” Ruiz said. “She had a budget in mind, and she stuck with that. It’s not too often that you find that.”

Sunshine State Builders began construction on the house in September 2011, and Frank received the keys to her home on Feb. 24.

“I had a really good experience working with the Housing Department and working with my project manager,” Frank said. “Overall, it was an awesome experience. I want my fellow community members to share the same experience that I did. Being a homeowner is like no other feeling.”