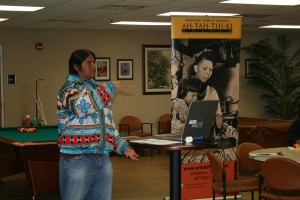 The event was put on by the Ah-Tah-Thi-Ki Museum. Van Samuels took Immokalee guests through the history of alligator wrestling in the Tribe, and Everett Osceola gave a personal account of his life as an alligator wrestler.

“Southeastern Indians hunted alligators, and it began long before Westerners even called it wrestling,” Samuels said. “It was called hunting, and a lot of the information comes from alligator wrestlers themselves who have seen it.”

He explained how alligator wrestling started off as an attraction and evolved into a sport.

Seminole Indians used to capture alligators out in the Everglades, bring them back to their camp for food and sell the hide. In order to preserve the meat for food, Seminoles would tether the alligators to poles until they were ready to kill them, Samuels said.

“Tourists would drive by, see the alligators tethered and viewed it as a form of entertainment and would throw money out there,” he said.

It eventually turned into a source of revenue for Tribal members, he said.

After Samuels spoke, Osceola explained different alligator handling techniques. Although he grew up watching his uncles Richard Bowers and Chairman James E. Billie wrestle alligators, his mother thought it was dangerous for him to do as a child, he said.

“It is not just a way of protection, but it is also out of respect,” he said.

During his lecture, he described the differences between the three styles of alligator wrestling: traditional, modern and extreme. He also discussed tricks and moves, including the Florida smile, frontal capture, head inside, face off and hand inside the mouth.

“Clinton Holt is very extreme,” Osceola said. “He puts his head inside. When he does it, I cringe.”

In his talk, he made sure to include the famous line, “It’s not if you get bit, it’s when you get bit.”

He also cleared up the misconception that the largest alligators are the most dangerous.

“A lot think it is the big ones that are the most dangerous, but really it’s not,” Osceola said. “It is the 5- and 6-feet alligators because they can jump and are quick.”

Geraldine Osceola, who works for the Immokalee Culture Department, was quick to ask what parts of the alligator the Indians used for food. She discovered that mainly the tail was used as food, but alligator eggs and ribs have also been consumed.

“I came for the history part,” Geraldine said. “It’s always been for tourist, but there is so much more to it. I take this information back to my students.”

Geraldine said that the Seminole Moments speakers help her teach the youth during cultural events and activities.

Beverly Rose of Immokalee Family Services said she is a regular to Seminole Moments as well.

“I always come,” Rose said. “It is interesting. I saw alligator wrestling at one of the events a long time ago. I wanted to know how they prepare and make the alligator ready for wrestling.”

Osceola explained that before doing shows with the alligators, the wrestlers will work with the animals to get a feeling for their temperament.

He concluded his part of the lecture by adding that Tribal members are raised not to kill unless they are going to eat it. He also said he, along with many other wrestlers including James Holt, Billy Walker and Austin Billie, put on exhibitions at the Native Village in Hollywood to help keep alligator wrestling popular and part of the culture.

“When they do their shows, I just feel like a little kid again,” he said. “Like I’m 7 or 8 years old watching my uncles.”