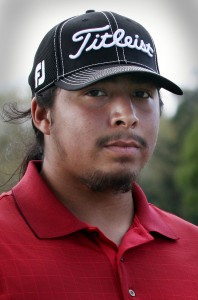 BIG CYPRESS — From the court to the diamond to the fairway, Quenton Cypress, 17, represents the unrelenting spirit of the Ahfachkee Warriors.

On March 22, the high school basketball and baseball player led schoolmates Troy Cantu and Caitlin Cypress to a second-place finish in the Rick Case Automotive 2nd annual High School Golf Challenge. Cypress played two parts in the four-player scramble against one boys’ and one girls’ team, both from Cypress Bay High School.

Cypress’ three years of consistent golfing experience came in handy when it came to adding double to his swing, he said.

“It was a four-man scramble but three showed up. I hit twice all the way around, so I actually played twice,” Cypress said. “It helped that I golf year-round. It keeps my swing smooth.”

Coached by Amos Mazzant, golf coordinator on the Big Cypress Reservation, the team scored 36 in the front nine and 39 on the back nine. Because the event was not sanctioned by the Florida High School Athletic Association, no winners or losers were announced or recorded.

“Basically, it was a friendly challenge between high school players. It made for a more relaxed and enjoyable day to acknowledge teen golfers,” said organizer Stan Bostic, national director of communications and VIP programs at Rick Case Automotive. “Kids are always getting attention for football, baseball and basketball, but we don’t hear enough about the golfers.”

Bostic said it makes sense to bring high school students out to the greens.

Thirty adult teams also played at the same time and place in the 9th annual Rick Case Golf Classic held to benefit The Prestige Club. Based in Broward, the club founded by president Polly Wilkie in 1996, donates time and money to organizations that help families and children in need.

During the inaugural school challenge last year, Ahfachkee scored the highest among several teen foursomes. In keeping with the non-ranking nature of the teen event, all participation prizes and trophies were the same. At the end of the day, however, the names of all participating schools are put into a hat for a scholarship drawing. Last year, Ahfachkee plucked a $1,000 scholarship. This year, the school came away with $500.

“The money goes to the athletic directors of the schools for distribution to a high school senior golfer with a GPA of 3.2 or higher…eventually we’d like to see 10 to 15 schools playing the challenge,” Bostic said.

Cypress said he would meet the golf challenge again, as he does with other sports.

“For me, it’s about doing my best whether I’m skating, golfing, playing basketball or shooting pool,” he said.