Skip to content
You are here
Home > Health > Seminole Tribe is No. 1 donor at this year’s March for Babies 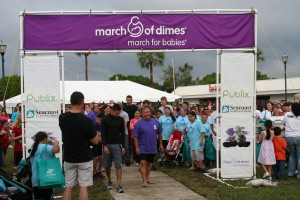 OKEECHOBEE — Tribal members and employees put on their walking shoes, packed their strollers and headed to Okeechobee for a special, early morning walk on March 10.

For several years, the Tribe’s team has been a top sponsor and top participator in the event. This year, 39 Tribal members and 16 employees came out to support the event. The Tribe’s team donated the most money – $5,000 – and had the second most participants of any team at the walk.

The Tribe has donated close to $100,000 to the March of Dimes in the almost 15 years they’ve participated in the Okeechobee walk, said Edna McDuffie, the Tribe’s walking coordinator. The Tribe’s involvement started as a community project but is now more health-driven, she said.

Participants met at 7:30 a.m. to check in, take a group photo in their matching T-shirts and stretch. At 8:30 a.m., the walk began. Walkers strode through old neighborhoods and visited several spirit stations along the way, where Okeechobee businesses give away candy and goodies.

For some Tribal families, the March for Babies is an annual event that brings them together to support a good cause.

For the past few years, Jessica Billie, a Brighton Tribal member who lives in Okeechobee, has attended with her family of 11.

“Even though I have had all full-term babies, I come out and walk to promote prematurity awareness campaign,” she said.

But for others, it hits close to home.

More than half a million babies are born too soon each year, and the Tribe is no exception to premature births.

Brighton Tribal member Elbert Snow has attended the walk for the past four years. His family has experienced several premature births, including his nephew’s daughter and four of his grandchildren.

“We hope that with the money that’s raised, they might be able to help a lot more,” Snow said.

“It was stressful,” said Patricia’s mother, Patty Entry, who is from Okeechobee. Entry’s three older children were also born prematurely, but none were as early as Patricia.

Entry has attended the March for Babies for more than 10 years, but last year’s event was particularly memorable.

Last year, Entry attended with all her children, including 5-month-old Patricia. To celebrate Patricia’s improving health, a mile marker was put up in her honor.

“It kind of really hit home because I knew how small she was, but it really put it in perspective putting her picture on [the mile marker] of her now and when she was [born],” Entry said.

Entry values the March of Dimes for all they’ve done for her.

“They’re there to support you and give you more resources,” said Entry, who called March of Dimes’ Cindy Hernandez in her time of need.

Entry attended the walk this year with her parents, children and several other family members, including a healthy 1-year-old Patricia.

The family wore T-shirts in honor of Patricia, and the shirt was voted favorite T-shirt at the event.