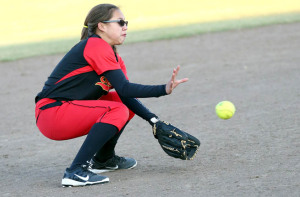 BRIGHTON — For the second year in a row, the Pemayetv Emahakv Charter School softball team hit the field with a young squad.

Only two eighth-graders – the same number as last season – are in the lineup. Sixth- and seventh-graders occupy the rest of the roster. The small contingent of eighth-graders is comprised of pitcher Aleina Micco and third baseman Krysta Burton, both key contributors for second-year coach Nancy Jimmie’s squad, which split its first two games.

After a 5-3 record last year, PECS started this season with a 10-9 victory at home against Glades Day School’s junior varsity Feb. 11. The Seminoles suffered their first loss Feb. 19 with a 7-0 setback against Okeechobee High’s junior varsity.

“We have the potential to go far and win every game; it’s just getting the girls motivated,” Jimmie said. “I’m confident in my older girls who want to be out here and play; I have about five or six that really want to play.”

“We had first-game jitters,” Jimmie said.

With Alaina behind the plate, Aleina produced a sharp outing in the circle against Okeechobee, but PECS’ bats were quiet. After Okeechobee built a 2-0 first-inning lead, Aleina responded with four straight scoreless innings. When Okeechobee threatened in the second inning, Aleina promptly snagged a line drive and threw to first baseman Jacee Jumper for a double play. Aleina fanned the next batter to end the inning. Later, she recorded another strikeout with an enticing change-up.

In the fifth, Jenna earned a walk as she battled back after being down in the count. The inning didn’t materialize into runs, but Jenna’s hard-earned walk was a small example of the type of determination that Jimmie is looking for from her team this season.