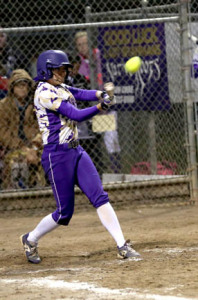 A year ago, Nunez batted in the No. 2 spot. This season, as a junior, her role at the plate has changed. As the No. 3 batter she’s expected to drive in runners, just like she did in the second inning when her opposite field single brought home two runs.

“We moved her down because she has a little bit more pop…and we can use that instead of having her bunt all the time in the 2 hole,” said Okeechobee coach and Tribal member Mary Huff. “We like her in the three spot; she definitely produces there.”

Nunez also had a double and an RBI sacrifice fly.

In addition to her sparkling night with the bat, Nunez flashed some impressive leather at third base, fielding all five balls hit her way with no errors.

Even though Okeechobee lost seven players from last year’s 15-9 squad, Huff expects another strong season in a tough Class 6A-District 13. As of Feb. 19, the Brahmans were on the right track with a 4-0 record, which included a 16-5 win against Fort Pierce Central. During the game, Rumor Juarez notched a couple hits. Although she isn’t a starter, her contributions come whether it’s on the field or on the bench.

“She does a great job for us in the dugout,” Huff said. “She cheers her teammates on every single play and lets them know what the plays are.”

Okeechobee’s victory against Moore Haven marked the first loss for Darryl Allen as the Terriers head coach. Moore Haven opened with wins against Clewiston, Southwest Florida Christian and LaBelle. The Terriers are trying to build on last season’s success that included district and regional titles and an appearance in the Class 3A state championship game, the furthest the team has gone in its history.

“To me the sky is the limit for us,” said Allen, a former Okeechobee assistant softball coach who previously coached at Pemayetv Emahakv Charter School and still serves as its athletic director. “Tonight is not indicative of who we are as a softball team or the way we played. We have to look at it that way. We know what we’re capable of.”

Sydnee Cypress, who batted .375 as a freshman, ripped a clean single to center in the sixth inning against Okeechobee.

Osceola, who hit the ball hard just about every trip, belted a two-run single into the left field corner in the fourth inning that sliced Okeechobee’s lead to 5-4 before the Brahmans pulled away.

After the game, Allen stressed to his team the importance of its next game, a district tilt against Evangelical Christian. His players responded in a big way with a 20-0 win.

“They put it all together and did exactly what they’re supposed to do,” Allen said.