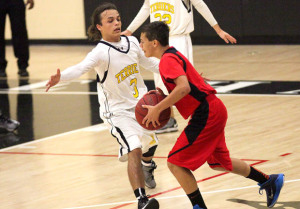 MOORE HAVEN — Josh Boromei hoped his first and only basketball season at Moore Haven High School would have lasted longer, but even a season-ending loss didn’t dampen the spirits of the sharp-shooting guard from Brighton.

Boromei, a senior who led Moore Haven in scoring this season with an average of about 16 points per game, finished his high school career with a game-high 18 points in a 49-34 loss to Evangelical Christian in a Class 3A-District 11 boys semifinal Feb. 3.

“It was a great time,” Boromei said about the season with his new team. “I played basketball my freshman year at Okeechobee, and I didn’t bond nowhere near as much as I did with the people, the fans and the team here.”

Boromei drained three 3-pointers in his finale, including the opening points of the game. Inside the arc, the 5-foot-7, 125-pounder demonstrated how he plays bigger than his frame. He displayed bold willingness with frequent ventures into the paint against an Evangelical Christian School squad that featured two 6-foot-6 players.

Boromei’s final points in a Moore Haven’s white, yellow and black uniform came late in the game when he drove toward the hoop, faked a defender to the right and put in a layup.

Evangelical Christian enjoyed an advantage in experience with a roster that included seven seniors; Moore Haven’s lone member from the class of 2015 was Boromei. Moore Haven had four seniors for part of the season, but by senior night Jan. 23 Boromei was the only one left.

“I got a lot of attention that night,” said Boromei, who was honored alongside his mother, Theresa Nunez, and his stepfather, Steve Frost. Boromei made senior night more memorable with a remarkable first half performance against Everglades City. By halftime, Boromei had already drained 27 points.

“As soon as I got the ball, I wanted to take off and speed up and fast break, try to take off on the scoreboard,” Boromei said. “It was just one of those nights where everything was going in for me. I didn’t even know I had that much at the half until they told me after the game.”

Foul trouble limited Boromei’s playing time and point production in the second half, but he matched his season high with 29 points in an 85-75 win.

Other highlights in Boromei’s season included a 29-point effort against Seacrest Country Day, 28 points against Dade Christian – which included seven 3-pointers – and 24 points against Canterbury.

“It’s the first double digit (victories) season at Moore Haven in 12 years I was told, so that was an accomplishment for us,” Pio said.

Boromei said he plans to attend college – Florida Gulf Coast University and Florida State are among his potential destinations – and study psychology or biology. This summer he’d like to help defend the Native American Basketball Invitational championship that he was part of last year with the Rez Runners.

“He’s a good kid. I wish we had him for a couple more years,” Pio said.