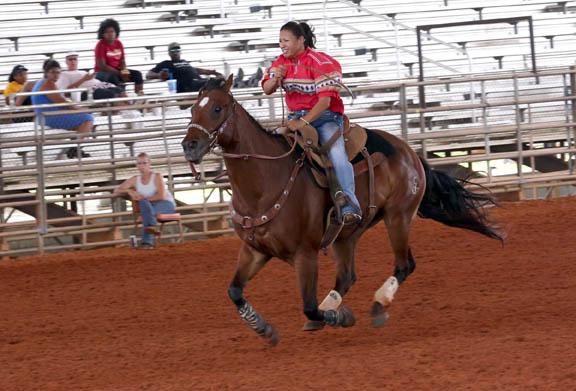 BIG CYPRESS — It took less than 17 seconds for a former ranch horse from Wyoming to make a deep impression at Junior Cypress Rodeo Arena.

Cracker, an 11-year-old quarter horse, and his rider Julie Navin turned in the fastest overall time June 13 to win the 1-D division in the 5-D Barrel Series’ third event of the season.

Cracker maneuvered around three barrels before making a final sprint through the center of the arena in 16.735 seconds.

“He was getting it today. He left deep marks around each barrel where he was coming in and turning,” said arena director Ayze Henry, who organizes the series with arena office coordinator Earleen Rimes.

A cast of about two dozen riders and their horses featured a mixture of adults, teenagers and a few aspiring riders younger than age 10. Last year the series started with four events; this season it’s been bumped up to six.

“We’re trying to build and hopefully it becomes one of the better-known series in South Florida,” said Henry, whose young children usually compete in the series, although they didn’t race June 13.

“They don’t have to join, but if you would like to run for the prizes we ask that you pay a membership fee and attend at least four out of the six shows,” Henry said.

Navin, 31, of Davie, rode in Big Cypress as a youth. She was thrilled last year to return to the reservation for racing.

“They started the series up last year, so we started coming back because the Seminole Tribe does such a great job when they give us rodeos and barrel races,” Navin said. “They put up great money and they do the ground as best they can for us. They’re always such a great pleasure to work with.”

Navin has also enjoyed working with Cracker. The duo became a team eight months ago after one of Navin’s horses was injured. A friend of Navin offered Cracker as a replacement and they’ve “clicked” ever since.

“He’s a bit of a goof ball. He’s got a little quirkiness, but he’s pretty much all business when he gets into the ring. I really like him,” Navin said.

Being chock-full of personality is exactly what Navin seeks in a horse.

“You know when something’s wrong with them; when they’re frightened of something,” she said. “He just really finds comfort in me. A lot of times he’ll turn to me for comfort in order to relax and to focus. He trusts me, and I trust him. When we get in that arena, there’s got to be a lot of trust with each other in order to get the job done.”

Navin and Cracker’s winning time was just a fraction of a second ahead of Ringer, who finished second in 1-D with Pete, a quarter horse, on the day’s 31st and final ride. Their time was 16.849.

“It wasn’t a perfect run. We had some mess-ups. We were wide on some barrels,” said Ringer, who lives in Brighton and enjoys competing in Big Cypress. “This is really good ground. Once it’s dragged, it’s perfect.”

Taylor Zbytek turned in the third fastest time in 16.950. Navin rode another horse to the fourth fastest time.

Some riders used the event as a final tune-up for the National Barrel Horse Association state final that was held the following week in Kissimmee.

The next event in the 5-D Barrel Series is July 11. The season will wrap up in the fall.