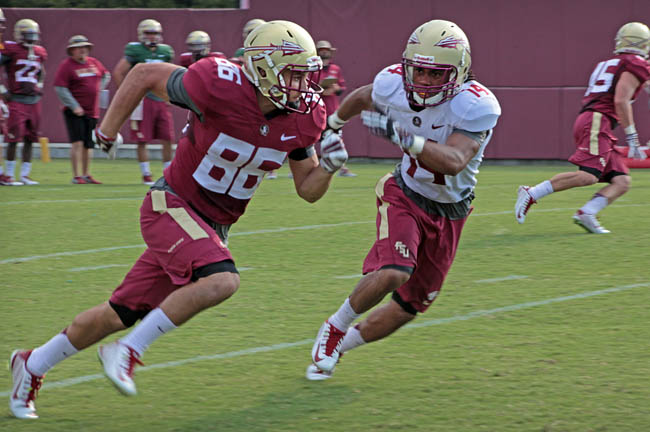 TALLAHASSEE — History is being made at Florida State University where the defending national champion Seminoles football team added its first Seminole Tribe of Florida member to the roster.

Justin Motlow now wears the uniform and plays for the team he’s rooted for his entire life.

“It feels surreal,” said Motlow, a freshman from Tampa. “I never imagined I’d be able to play here. I’m going to make the most of my opportunity and keep working.”

“We just want to represent the Seminole family for all they have done for us,” Fisher said. “It’s a great honor to have a family member wear that helmet.”

Motlow, Tampa Catholic High School’s 2013 offensive player of the year and wide receiver of the year, earned his spot on FSU’s roster as a preferred walk-on player. In August, he spent two weeks at training camp with the rest of the squad. Freshmen players included 26 recruits and 25 walk-ons hoping to make the team.

“The first time they step on campus, they aren’t playing football; they are training to play football,” said Vic Viloria, FSU’s head strength and conditioning coach. “One of two things can happen; they get the opportunity or it goes away. Being dependable and accountable will make their chances better.”

New players had a lot to learn at training camp, including the playbook, before the Aug. 30 season opener against Oklahoma State University in Arlington, Texas. From the sidelines, coaches signaled with their hands and shouted random phrases, which identify specific plays.

Approximately 130 players will make up the team’s final roster, with only 72 attending away games. Motlow probably won’t start or travel to away games this year, but he will be in uniform for all home games. FSU’s first home game is Sept. 6 against The Citadel.

To get into shape, Motlow spent the summer working out with the team. He said conditioning and running were harder than in high school.

Regardless of his teammates’ daunting sizes, the 5-foot-11, 182-pound Motlow sees himself fitting in. He’s already getting the hang of things and adjusting to dorm life with other players.

“I expect him to come in and fit into the system,” Fisher said. “He’s doing a great job and is showing ability to learn.”

Coaches have high hopes for the new players, who get a lot of reps during practice.

“I’ll keep evaluating them as it goes,” Fisher said. “There’s no pressure on them; as they pick it up, they will evolve into their roles on the team.”

Motlow is working closely with co-offensive coordinator/wide receivers coach Lawrence Dawsey, a former wide receiver for FSU and the Tampa Bay Buccaneers. Dawsey was also an assistant coach at Tampa Catholic, but not when Motlow attended the school.

“I like what I see,” Dawsey said. “Justin has good ball skills. He can run good routes and can catch the ball. He will be a good football player, but his head is spinning with the new offense and the tempo. But he’s eager to learn and not backing down.”

After his first week at training camp, Motlow said he was adjusting to the system.

“I’m trying to learn the playbook,” he said. “I’m soaking it all in and learning more every day. The pace is so much faster than high school.”

Motlow isn’t the only member of his family at FSU; his sister Jessica is a junior and a communications major.

“It’s weird having Justin here, but it’s awesome at the same time,” she said.

Motlow knows his parents will visit more often now that both he and his sister attend FSU.

“They are happy I get to keep playing football,” he said.