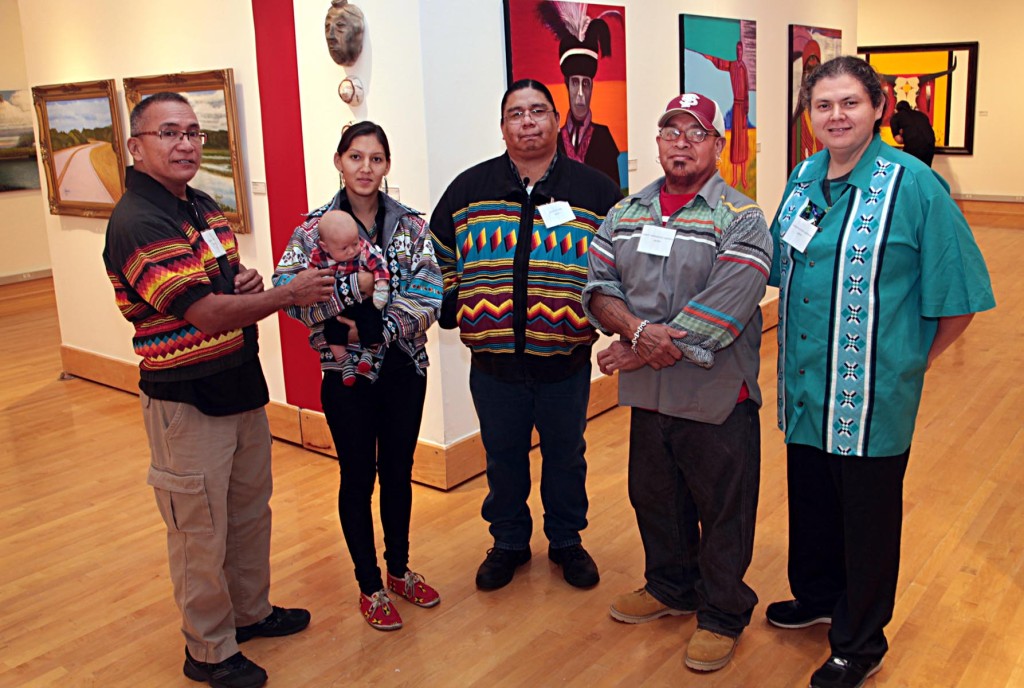 “We wanted to clear up the misconception that Native Americans only create artifacts and crafts,” said Jessica Osceola, who co-curated the show with gallery coordinator Anica Sturdivant. “We are still artists, but we hold onto our traditional crafts and lifestyles and incorporate them into contemporary mediums, techniques, tools and expressions.”

Jessica Osceola reached out to other Seminole artists to demonstrate that many Native Americans are fine artists.

“We’re more than a casino,” Wareham said. “Our culture, traditions and the beauty of our art is alive. We are not just a part of Florida; we are Florida. This is how we like to express ourselves – through the arts.”
Jumper and Wareham also added performance art to the opening event. Jumper, accompanied by a guitarist and singer, recited poetry and created a drawing of the Everglades, which was projected onto the wall while he worked.

Wareham, also a storyteller, dramatically recounted the story of the rabbit and the box turtle.

Afterward, he played an original composition on the flute, titled “Mother.”

Tommie, a filmmaker, artist and musician, introduced himself to the crowd by describing his childhood in Big Cypress.

“The Everglades was very much a paradise,” he said. “Big Cypress used to be a wetland. Over the years it has become very dry; the United States has been very successful in drying out the Everglades. Today the Tribe is going up against Florida Power & Light, who wants to build one of the largest power plants in the U.S. immediately north of the Big Cypress Reservation. It will disrupt life as the creator wanted it to be.”

Tommie’s film Fight to Breathe played on a continuous loop in the gallery.

LeRoy “Henehayo” Osceola introduced himself as a self-taught traditional Seminole. His work incorporated Native American images, as well as artifacts.

Wareham shared his love of photography and its origin; his mother was a “shutterbug” and gave him a camera with one roll of film.

“I started taking photos of people who would ask me for copies,” he said. “So I started a little business photographing families. What I made from that paid for my real passion, which is shooting photos in the Everglades.”

His large-scale nature photographs filled a gallery wall. Prints of a woodpecker about to take flight from a tree trunk and a hummingbird in mid-flight feeding on a flower captivated people and drew them in for closer looks.

“I have been collecting Native American art for years,” said Sue Martin, of Fort Myers. “I was very interested in seeing this show.”

The artists were pleased with the way their work filled the gallery space.

“I hope people get an appreciation for contemporary Seminole art, as well as the traditional aspects of it,” Jumper said.