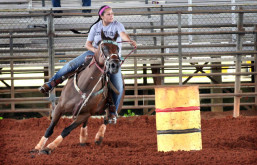 “I’m here for the fun, money and excitement,” said Monica McGoey, of Davie, who rode two runs on her horses Cool and Favon.

Fifty competitors turned out to run 64 horses through the clover-leaf course for the fastest times. Times were clocked by an electronic eye and entered into barrel race computing software by arena office coordinator Earleen Rimes.

Competitor Chris Caldwell, a veteran rodeo announcer and a member of the Labelle Family Livestock Club, said the race is “so popular” because riders do not have to be the fastest to win a check.

“It’s about the cleanest runs and the fastest time. A winner can be a half-second off the fastest horse,” Caldwell said.

Arena director Ayze Henry said cash prizes will be awarded each date. Competitors must compete in three of the four dates to be eligible for grand prizes at the end of the series. Prizes will go to the top three in each division.

“The prizes are the latest and greatest, prettiest and shiniest and all one-of-a-kind. We’re really excited to have Jaco on board,” Henry said.

This summer, the rodeo arena was home to the second annual Junior Rodeo Series, started last summer by former program director Alfonso Tigertail. The rodeo brought about 250 young riders from cities and towns throughout South Florida.

“But we welcome kids from all over. If they want to compete, we’re open to them,” she said.

Membership in the arena is open to non-Tribal competitors for $50 per year.

Dyami Nelson, who is the reigning Seminole junior bull riding champ, led the pack of Tribal kids who pitched in behind the chute.

“They always help each other out. It teaches sportsmanship and teamwork,” Henry said.

The arena is also a practice hub for up to 30 cowboys, mostly from Miami, who show up on Tuesdays and Thursdays to run steer.

Henry said the arena is creating more outside interest and bringing in more revenue.

“We’re supposed to be busy. We are up and running and working with outsiders to create even more events. It makes no sense to have a state-of-the-art facility just sit here,” Henry said.

McGoey and her friends Dayna Harrold and Ashley Parks, also of Davie, competed in the first 5-D barrel race at Junior Cypress arena and will likely compete in the next three. Sign-ups start at 10 a.m.; show time is noon.

The three avid barrel racers travel together to compete in contests statewide.