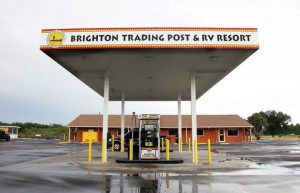 BRIGHTON — After about 45 years in existence, the Seminole Trading Post on the Brighton Reservation underwent a much-needed renovation.

Tribal officials and members, as well as people from surrounding counties, made the trek to Brighton on July 26 for the grand reopening of the improved Brighton Trading Post.

“This is a project that we have been working on since I took seat exactly a year ago,” Brighton Board Rep. Larry Howard said. “We had to blow this thing up as big as possible so we could generate more people to come here and do business with us from the outside.”

The day brought energy and excitement with Seminole Tribe regular Mobile Mike and several radio stations, including Wild 95.5 and Y100 Miami, giving away CDs, DVDs, and waterpark and concert tickets.

Cars also lined up in both directions along Highway 721 hoping to be one of the first 200 patrons to arrive at the Trading Post to receive $25 of free gas.

James Holt, along with his brother Clinton Holt, kept Seminole heritage alive by putting on alligator wrestling and venomous snake demonstrations throughout the day. Also, Mobile Mike’s Gourmet Burgers and Fries provided a free lunch of hamburgers, hot dogs and refreshments for the crowd, while people popped in and out of the newly constructed convenience store to see the transformation.

“It’s a step up from the old one,” Lynvetta Myers, of Moore Haven, said.

President Tony Sanchez Jr. said he was surprised when he got his first peek inside.

“I was here last week, and when I walked in I didn’t know where I was at,” he said. “It just looks so great.”

The Brighton Trading Post got a complete makeover with the addition of about 1,000 square feet. The original building was completely gutted, which included not only the convenience store but also a Laundromat and manager’s office for the RV park, which is also a Tribal entity.

A trailer facility was brought in to accommodate the Laundromat and manager’s office, as well as serve as the point of sale system for the Trading Post’s gasoline services.

“We were able to [keep] the store open for the community because that was very important on Larry Howard’s list,” said Juan Menendez, the manager for the Board Construction Division.

The construction lasted roughly four months and resulted in an almost 2,500-square-foot convenience store with all new amenities, including the infamous Beer Vault.

“We actually added more things in our store,” Rep. Howard said. “We have hot foods – something we never had before – mocha, cold coffee and a brand-new slushie machine for the kids.”

Rep. Howard said he wanted to prevent this project from sitting on the backburner.

“He was very psyched about the project,” Menendez said about Rep. Howard. “He was out here every day during construction.”

The Brighton Trading Post is an entity of the Seminole Tribe of Florida, Inc. under the Board of Representatives.

“It is a continuation to the commitment that we made to our shareholders that we are going to take the current enterprises and make them more efficient, make them realize their full potential,” President Sanchez said. “And this [renovation] is just one of the examples.”

Utilizing a few other Board enterprises, the Brighton Trading Post sells the Seminole Tribe’s very own orange juice and water.

The Brighton community hopes the renovated Trading Post will draw the attention of people visiting the Brighton Casino or simply passing through the reservation.

“This is their store and it gives them something to be proud of,” Hollywood Board Rep. Chris Osceola said. “If it has the name Seminole Tribe on it, it represents all of us and it should look as good as it possibly could look. What we had out here before was just a little run-down shop that needed a lot of attention, and I think the people out here in Brighton got what they deserve with this new store.”