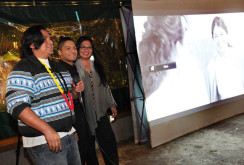 FORT LAUDERDALE — The question whether art imitates life or life imitates art went unanswered in Fort Lauderdale at a screening of a 1958 film that provides a 12-hour, neo-realistic view of young Native American adults living in a gritty, low-rent district of Los Angeles.

Instead, when the movie “The Exiles” was followed with the 2014 short film “Legacy of Exiled NDNZ” by Navajo photographer and filmmaker Pamela J. Peters, one thing became clear: Art and life converge and evolve.

“When I first saw ‘The Exiles’ I felt the need for the next thing. We have to look at the times back then and the fact that neo-realism does not need ending. It is a slice of life,” Peters said after the Nov. 23 event at Stranahan House.

In the 1958 flick, one “night-in-the-life” depiction took two years to film with a spur-of-the-moment cast of southwest reservation transplants whose real lives were sifted for accurate circumstance and dialogue. Filmmaker Kent MacKenzie pieced together hopeful but desperate voice-overs with bleak but brilliant black and white images for an ordinary night of dancing, drinking, drumming, brawling and deep introspection.

It was a time in history, Peters said, when many Native Americans were lured off reservations to cities, such as Chicago, Cleveland, Dallas and Denver, with promises of jobs and brighter futures through the Bureau of Indian Affairs and the Urban Relocation Program established in 1952.

In Los Angeles, many settled into the seedy Bunker Hill district where jobs were scarce and money provided by the BIA ran out fast. Many ended aimless days with moonlit drumming and singing on Hill X that overlooked the city.

“You can take the Indian off the reservation but you can’t take the reservation out of the Indian,” said Max Osceola, who attended the screening. “Everything else was escapism, but when they came together with the drums, they were one people.”

The appearance of truth and believability was achieved in the stark, sometimes lumbering 90-minute film without a traditional Hollywood beginning, climax and end that ties story lines into a neat finale. Neo-realism in film was a pre-documentary style of narrative storytelling that emerged post-World War II to bring issues to light with bold authenticity.

Peters’ short film – selected for five 2014 film festivals, including the LA Shorts Fest, American Indian Film Festival and the LA Skins Fest – continues the story with contemporary Native American adults, including Seminole Tribe member Spencer Battiest. Battiest, who attended the screening, is the only full-time artist/actor of the bunch.

Battiest and the others, who are all current college students or graduate students in Los Angeles, are connected by the struggles of their grandparents, some of whom also journeyed off southwest reservations during the urban relocation more than a half-century ago.

Filmed in Los Angles on similar streets, the new cast is introduced wearing late 1950s clothing and strolling through an alley as in the last scene of “The Exiles.” In close-up interviews, all say they plan to return to their reservations or serve Indian communities in urban areas.

Peters said the short is a teaser for a full-length feature film that will follow the new cast for two or three years utilizing neo-realism characteristics.

“It is organic the way it happens,” Peters said. “I want to bring a realistic voice to how Native people are living in LA today … I want to show the journey.”

Since the short’s debut, some cast members have graduated from universities and launched careers, some have married and one couple has produced a set of twin children. Battiest, who divides time between Los Angeles, New York and the Hollywood Reservation, was nominated for 2014 song/single of the year and best music video by the Native American Music Awards. On Nov. 9, he performed with his brother Doc Battiest at the 39th annual American Indian Film Festival in San Francisco.

“We are now in a different time and era. Originally, young people were coming out of boarding schools and institutions. Now they are coming out of UCLA as graduates,” Peters said.

The original cast was not so fortunate; most fell into obscurity. Tommy Reynolds was the only performer to continue in the film industry, Peters said.

“The Exiles,” by MacKenzie, was available for release in 1961 but never made it to commercial screens. In 2003, snippets of night scenes from the picture were used in the film “Los Angeles Plays Itself.” Later, the original was restored with help from the UCLA Film & Television Archive and in 2009, it was listed in the National Film Registry at the Library of Congress for its historical, cultural and social significance.

Seminole Cinema Night was the first in an occasional series to be hosted by Everett Osceola, who is the former face of Seminole Media Productions’ SCTV and a current management trainee at Ah-Tah-Thi-Ki Museum on the Big Cypress Reservation.

April Kirk, executive director of Stranahan House, said they are committed to making the events successful.

“We’re dedicated to making Native American film nights happen so well that we’re going to need guards at the gates because we’re going to bring in the biggest directors in Hollywood,” Kirk said.

Holding Native film nights near the New River carries additional significance because Seminoles once thrived along the river before being displaced by white settlers and then by bloody skirmishes with the U.S. Army. During the turn of the 20th century, Frank and Ivy Stranahan befriended the Seminoles and welcomed the Tribe to their home, where Frank ran a trading post and Ivy taught Seminole children.

In January, a bronze statue of a Seminole girl is expected to be erected directly across the river in a passive park donated by the city of Fort Lauderdale.

Peters said momentum is building within the Native film industry.

“There is a renaissance happening. We’re gradually getting into the mainstream,” Peters said. “With artists like Chris Eyre, Sterlin Harjo and Steven Judd, we’re creating a large movement.”