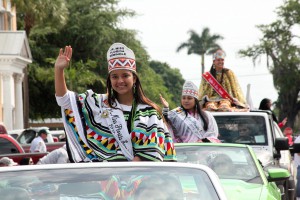 MOORE HAVEN — The Seminole Tribe has been an important participant in the annual Chalo Nitka Festival in Moore Haven since it began in 1948 to celebrate the paving of what was then Main Street, and they were out in force March 2 at this year’s festivities.

“It’s an opportunity for Glades County folks, including the Tribe, to get together, have fun and meet old friends,” said Brighton Councilman Andrew J. Bowers Jr. “It’s a fun day for everyone and I’m glad to be part of it.”

The newly crowned Little Miss and Little Mr. Seminole sat on the back of a convertible and waved to the crowd like pros – after all, it was their second parade.

“I was excited,” added Little Miss Seminole Sarafina Billie, 6. “Everybody waved back.”

There was a midway with carnival games and rides. Food vendors offered everything from Indian tacos to barbecue dinners, caramel apples, corn dogs and cotton candy.

The brisk early morning weather forced families to bundle together under blankets while watching the parade. Along the parade route, a hand-cart vendor made his way down the road, but there were no takers for his frozen treats. By the time the parade was over, the temperature rose enough for people shed their heavy outerwear.

Entertainment was continuous on the stage in Chalo Nitka Park. After the cloggers and alligator cleared the stage, the Tribe held a clothing contest. All ages competed; babies and toddlers endured it, while adults relished the experience. The intricate patchwork outfits won crowd approval, judging from the applause.